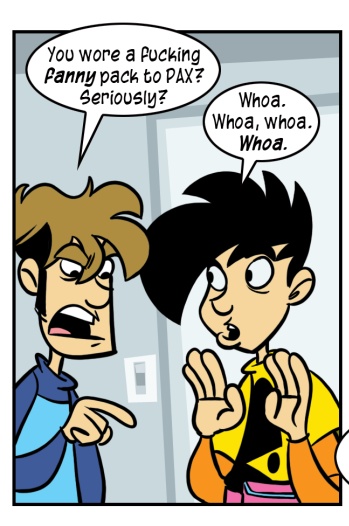 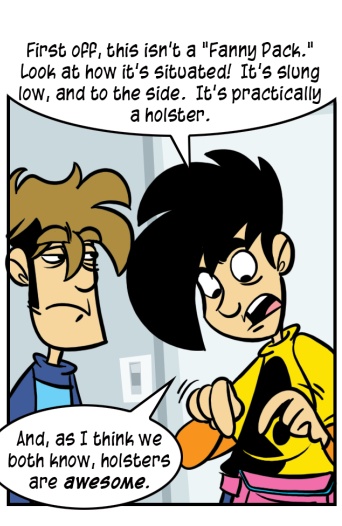 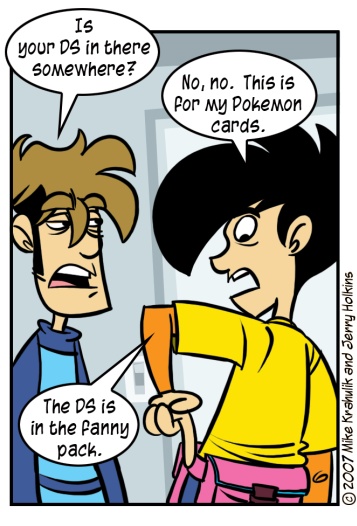 This is the comic that we drew - well, that Gabe drew, from my flawless transcription - upon the storied stage at PAX 2007. I'm proud of him, actually - he braved the tabletop floor in search of a game, a Gabriel first. Let me also relate with some pride that he now keeps his cards in a sealed deckbox. When he begins playing with a fully sleeved deck, know this: tears will flow.

You might have heard that Wil Wheaton's keynote was an incredible and life-affirming experience, but you need not shiver in the cold darkness out beyond the rays of his healing light. You can simply download it and make this sort of determination for yourself. It's straight out of the board, so it sounds pretty nice. We have these for the bands, too. We'll find out what they're okay with as far as distribution goes.

Communicating PAX would be quite impossible. If you were there, you know - and if you weren't there, I'm certain you'd prefer to hear about something else. I'm afraid I'll be unable to satisfy the last group, as these posts are typically my recovery process. My consciousness is still tumbling down some theoretical neon helix. As evidence of this, I submit that last fucking sentence.

For last year's secret round of the Omegathon, we chose Tetris - it's elemental gameplay, which is a virtue we like to uphold in that round, but we found the one guy in the entire universe who had never played Tetris. This year, when Frankie offered up Bungie's full support of the event, we realized fairly quickly that we had a startling opportunity here. Then, in the space of a week, we commissioned the Minibosses to deliver a trademark version of the Halo 3 theme over Cortana's chilling rampancy. Neither MNC Dover or Accolon were especially familiar with Halo, another statistical impossibility, but this might have been for the best - they were doing battle on never seen before maps, each of them tuned in Forge to have piles of big guns jammed into every crevice. To quote Bungie's Lukems, this was Halo: Hyper Fighting Edition. Accolon eventually took it, but our competitors definitely delivered the required spectacle.

We were asked if we had largely become figureheads at the event, as its size has grown beyond all reasonability - and we gladly answered in the affirmative. It would be impossible for us to create something like this by ourselves, and we're not good at it anyway, so it would almost certainly be a disaster. We simply provide the rallying point, with the full knowledge that we are not necessary or even desirable. We know where the strength actually lies - in the profound vigor of gamers' participation culture.

Could we ask for any better? To inaugurate, and then recede? To appear at holidays of state in our regalia, to christen the newly born? Give me this, above all else: to serve you, in my way, and then to turn, and be gone.

snap your mandibles once to say you understand