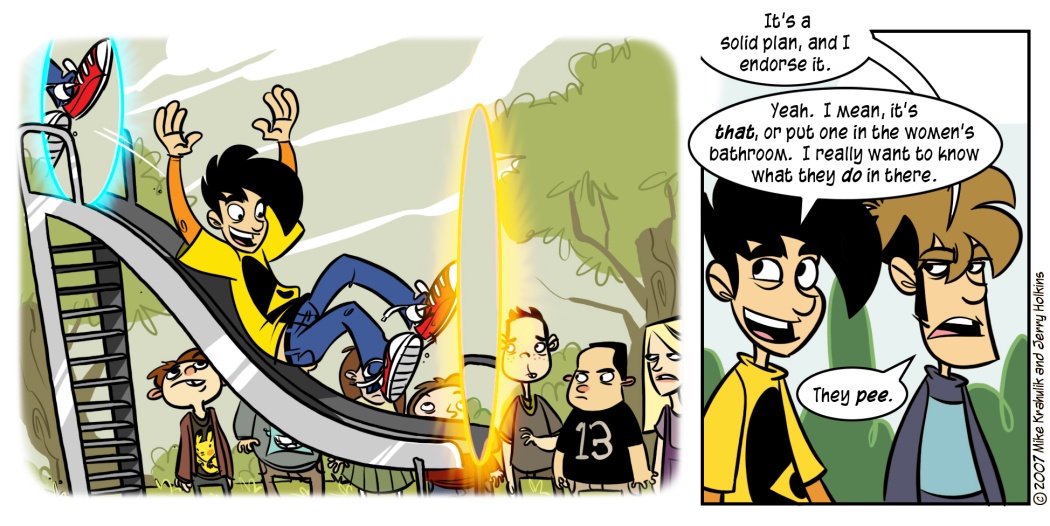 Having already purchased two fifths of The Orange Box over the last few years, the level of value I have derived from it is "fantastic" but not "supernatural." For Gabriel, who never finished the second Half-Life and never purchased the first episode, the aforementioned Box represents an intimidating and possibly even brutal level of content for one's holiday dollar. It's hard enough trying to keep up with all the games that are coming out, but when you start putting more than one game on the disc the difficulty is compounded. We're lucky, then, than the best thing on there can be completed in only a couple hours.

I've tried to make my rounds through the disc, but I kept coming back to Portal until I'd completed it. I expect every part of this strange collection to be full of virtue, in the way that Valve's anomalous position in the games industry allows: self-funded development in their sky-high Bellevue commune until each product sings. But Portal is strange, even for them. Risky on every axis, we may now say that the "first person puzzle comedy" has now been proven out as a genre. The gameplay is strong, but Portal's unique combination of hilarity and menace elevates it, resulting in a few perfect, indelible hours of gameplay.

My TeamFortress 2 experience so far on the console has been fairly uneven. Coming from the PC beta, where I sometimes battled with stability concerns but the games played smooth, I'm now grappling with the reverse. I love the play experience, as I've already expressed, and I'm rarely of the opinion that having more players automatically improves a game - so the differential between the PC and 360 platforms isn't as important to me as it might be to others. No, the problem with TF2 on the 360 (and likely the PS3, as well) is that peer to peer hosting just ain't cutting it. There are games that seem to manage it better, but with Vista PCs authenticating into the service now peer to peer games should be an option. This needs fixed overnight.

I'll try to complete the second Episode over the weekend, interleaved with finishing the writing on my own game, which has become more difficult since completing Portal. I'm starting to think that Precipice needs a greater concentration of synthesized ladies.

I would be abdicating my duty if I neglected to mention the EA thing, which is really the EA/BioWare/Pandemic thing. I was under the impression that BioWare and Pandemic had merged precisely to give themselves leverage over monolithic publishers like Electronic Arts, but who knows. The biggest fallout in the short term is that, beyond the first Mass Effect, a multiplatform release is almost certain. Of course, I wholly endorse that kind of thing, but I imagine that Microsoft might hold a different opinion. After spending years promoting the series, enduring delays, and now having spent months beating the shit out of it in test, it's fair to say that MS was investing in a larger trilogy - one that gamers would associate exclusively with their brand.

i felt unfettered and alive