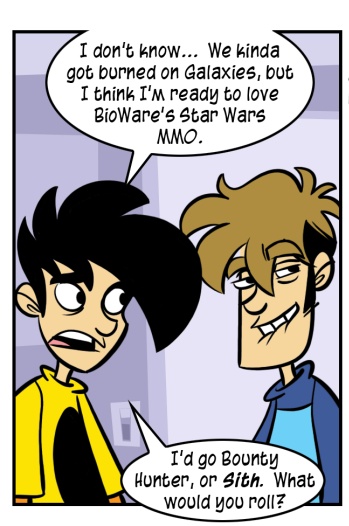 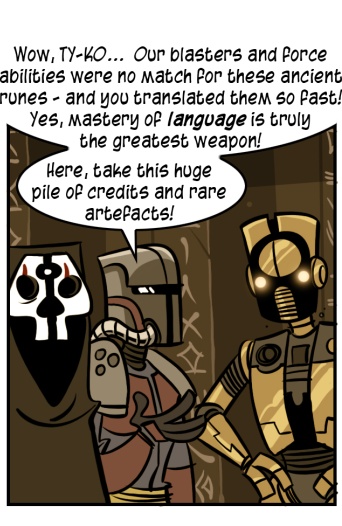 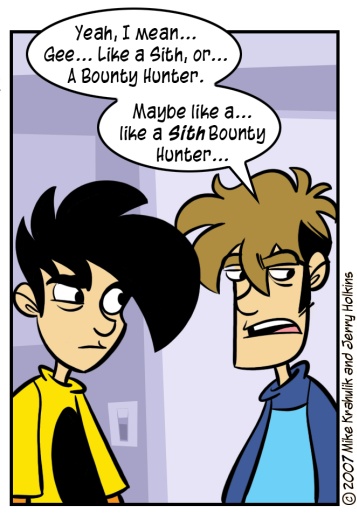 This rumor - the rumor about a Texas based BioWare being behind a Star Wars MMO - keeps coming back because I think we really want it to be true. We invest in it, we fantasize about it. It's also just a great rumor: it flips all the right switches, it has that Returning King quality that manufactures legend.

Eye of Judgment should be out today in most places, and we've tried to play it almost every day since the review copy came in. As a result, if you're picking it up, some of this information might be of use to you. The review copy they sent included only two decks, and these decks overlapped on many cards, so I think people (even reviewers) have only seen a small fraction of the total gamespace. In addition, the final set has mystery cards - cards with no art or stats, that must be revealed by the Eye. I'm hoping to pull one of those today. With that...

I. It's not a game of combat, it's a game of position. The whole thing is very Sun Tzu. The first two times we played Kotaku's Brian Crecente, we claimed victory - and this is because, as in virtually every other context, Gabriel and I together make a single competent individual. The last two losses, it was Gabe or I solo. We tend to mitigate each others' bloodthirsty tendencies. Remember The Art Of War: "To fight and conquer in all your battles is not supreme excellence." Killing an opponent's creature awards them mana, and you can destabilize the game quickly with unchecked aggression. If you play Eye of Judgment like a tactical game, as we have done - playing each card for maximum effect in battle - you'll often lose. Not every time, no. You'll be rewarded for this barbarity just enough to make you think it's the true path. Keep in mind that the victory condition is to occupy five spaces on the grid. Body count, in the final analysis, is irrelevant.

II. When playing online, you're often going to run into cards you haven't seen before. You'll see any pertinent information when they're played, but when planning against unpredictable online opponents with mysterious decks you'll be putting your Status Card to use. One of the four function cards that are outside of your deck proper, flashing this card to the camera will pull up a very technical readout of the board - no fancy graphics, just a distillation raw gameplay. To leave this screen, you'll need to flash the Cancel Card - another of the four. You don't want to dig around for this fucker, especially with the clock running. You might do as we did: simply tape your Status Card and your Cancel Card back to back. I guess it's sort of lo-fi, but it really cleans up a messy process.

III. If you have multiples of a single card in your deck, and you are having trouble registering them, let me save you some time figuring out why your scans are losing cards. You need to lay all your multiple cards in front of the eye at once, so it can verify that you actually own the number of cards you claim to. Otherwise, you could just scan the same card over and over into the system. If you're registering a deck quickly (and you really can, if you lay out multiple cards) do your multiples last, in single batches.

IV. We were having trouble getting the proper light in our terrifying cave here, and so we experimented with a number of light solutions. What we learned is that it likes as much even, normal light as possible. For example, this is too much.

In your zeal, you can overdo it. Glare is just as much a concern as low light. There is a tool built in to calibrate your setup, but it doesn't work like I thought it did. I had put a card on every tile and then started the process, hoping to verify that I was good for actual play, but no matter where I placed lights - and this is a process I invested perhaps two hours in, over the course of two days - it would only recognize five of the cards. It turns out that that it will only recognize five cards simultaneously, so, that was a monumental waste of fucking time which you need not replicate. Just take a single card and move it to verify each field, and you're ready to go.

V. There are a number of theme decks available, I imagine because this is common practice with a normal CCG, but one of the main things I like about Eye of Judgement is that you can't really get away with a deck that isn't diverse. I haven't seen those decks, so I don't know what they contain, but even the "Earth Emperor" deck could only include perhaps six earth cards out of thirty. You need to play to the field, and the field is always comprised of five different elements. Regular games of this type turn on highly focused, one or two element decks, so once you've decided how you want to focus most booster packs only have one or two cards that even apply to you. Here, every pack might have something you can build in. It's something I find very appealing.

We're excited to actually see people online, as during this "review" period, the only way to play the game was to set up explicit matches with other individuals - hardly an approximation of a vital community. We've had a lot of fun with the it, and I sincerely hope the game finds its players.

I've endeavored to learn about Zack & Wiki in order to know if I should be watching it, but much like the new Alone in the Dark I haven't been able to make heads or tails of the existing preview content. Now that the reviews are out, and I am able to read paragraph after paragraph of adulation, I've got to get my hands on it. It combines adventure-style object interactions with Wii interactivity, but unlike a traditional adventure game it breaks up the challenges into discrete levels. It has a mechanism in place so that anyone with a Wiimote can point things out in order to collaborate on puzzles. So... fuck yes.