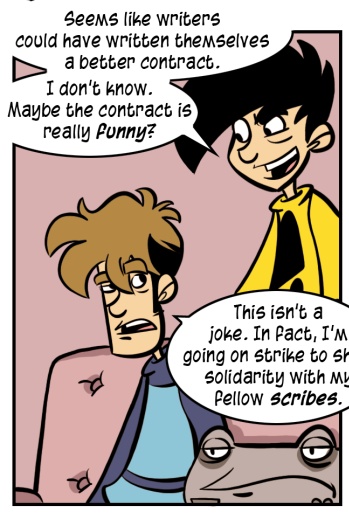 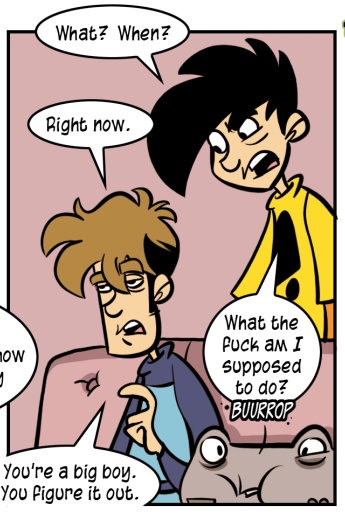 I doubt very seriously that I have anything of substance to add regarding the Writer's Guild Strike, though we have ostensibly done a comic on the topic, even though it was mostly an opportunity for Gabriel to draw a dinosaur. The Writers Guild is dealing with the same issues that Musicians have been dealing with, that is to say, compensation when the same work takes on a different form in this baffling digital age. The way contracts are currently written, there is some magical distinction between content that is broadcast on television, played from a disc, or streamed online. It's hard to imagine there are people who actually claim to believe this kind of mysticism.

We don't know what else will be available in Microsoft's Fall Update for the 360, but the rumored (then confirmed, now certain) Family Settings stuff is now fully detailed. Their seriousness on the topic underlies what I've been hearing for awhile - that they essentially see themselves with their boot on Sony's exposed chest, secure in the defeat of their foe and convinced of their martial prowess. It's the cultural currency of the Wii they find terrifying, and you can see it in their recent maneuvers. In any case, it's the most robust system of its kind currently in place. I don't understand why their system requires children to create Passport accounts, and I have to say that I'm not likely to pay an additional fifty dollars so my son can play Halo with [420]-=WeedPot=-. They need to spin up asynchronous guesting for child accounts, work up a family pay option, or go ad supported before this notion of a fully connected Xbox Family really materializes.

The 2.00 firmware for the Playstation 3 had begun to take on mythical proportions, to the extent that one could almost hear the approach of its pounding hooves. Aside from allowing your Playstation 3 "to act as a Divine Conduit" and the inclusion of a unique popcorn setting, most people expected (and not without reason) that the two point oh would bring in-game access to the XMB , granting users the core social functionality via any title. This is really the big one, as in a single move Sony would deliver something very much like parity with Microsoft's premium offering. Before it shut down, industry blog Inner Bits carried interesting commentary and offered potential solutions on some of the concerns Sony faces in implementing the feature.

Also! A New Shirt. I feel confident you'll arrive at the reference:

i fill up my garage