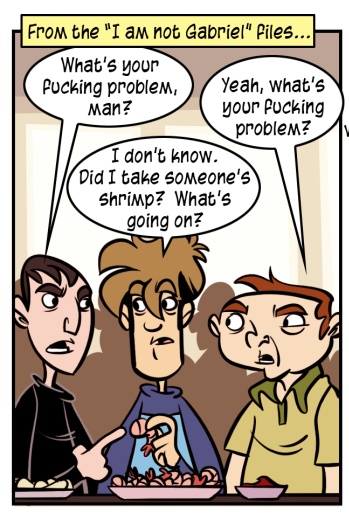 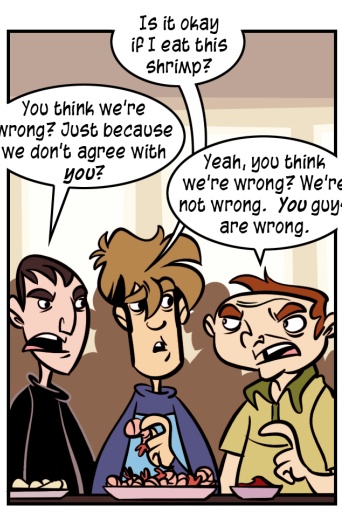 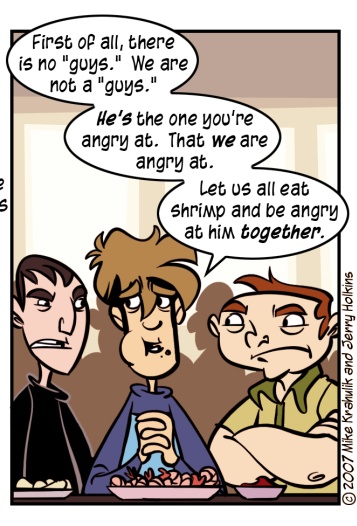 Gabriel has apparently made an enemy, perhaps I should say another one, as he does every few months the site is in operation. The man in question can barely put one word after the other by the time he is done with his bizarre soliloquy, rage at my cohort had swallowed his intellect whole. Now he understands one tenth of what it's like to interact with Michael Fucking Krahulik every day.

In essence, the post that started all the trouble asserts three things:

1. Game Reviewers Are Wrong
2. They Will Always Be Wrong

and the next one, the one that still brings out the sweat on their forehead,

3. Their Method For Reviewing Games Is Corrupt In An Imperceptible Way.

My partner in this enterprise is a base and vile aggressor, and I must often make peace, defend my honor, or assert my status as a unique being. This is actually a rare case where he and I actually agree on the game in question, unlike, say, Call of Duty 4 (whose merits I was never able to convince him of) or Mass Effect (which I essentially had to force him to play).

Some of the complaints I've read simply aren't factual - for example, the "one button" or "button mashing" combat is actually six button combat, built around two stances and few precise timing elements that should appeal to fans of fighting and rhythm games, of which we are both. As you progress, you're given these buttons and their functions one at a time. If you don't like the timing on a particular weapon, you're welcome to try the other two. Much of it is just taste, and I don't have such a high opinion of myself that I'm making declaratory statements about ludic law. If I had to state the difference between our approach and others, it's that we seem to understand that we are simply expressing an opinion. The age of the psychic reviewer shaman is over. You should never allow a meaningless, arbitrary integer promulgated by an arbitrary voice who came to power arbitrarily make decisions for you. That's essentially what Gabriel was trying to say, but he said it in a Gabriel way and it may be that the signal was lost.

The Investigations one must perform to reveal an assassination target are drawn from a limited pool of activities - much has been said about how repetitive this makes the game. There's really no argument there, a greater number of these might have ameliorated some of the complaints. If we didn't feel like doing a particular type of mission at that moment, we found another one we actually wanted to - there are several options per target, and at least half of them are optional. But for us, after we've taken a dynamic route to a place, being careful to look for clean lines we can traverse dramatically, dealt with rooftop guards, and then activated the investigation of our choice (hearing a completely custom conversation that reveals more about the game's personalities), we have experienced something unique. Sitting on a bench to overhear a conversation is not especially exciting, and we rarely chose to do it. But picking pockets or interrogating revealed a number of unique scenarios: the target must be robbed in in-between arches, while you are blocked from the view of the guards. The target immediately passes two guards on the way into a walled section of the city. The target's route passes by alert guards on his left roughly every four seconds down a long road, until there is a moment to snatch the document. This is all after interacting with one of the three bureau chiefs to get these missions, all of which have extremely distinct personalities and who relate to you differently as the game progresses.

Each assassination is also completely unique, and the later missions are as cinematic and tense as anything I have ever played in a videogame, but if you are not engaged by the story or are playing it for some other purpose than to play it may be that these things don't penetrate. If you don't understand how combat works at this point - after having it given to you button by button over the course of twelve hours - you will hate it. The ending of the game is, for lack of a better term, French. We liked the ability to discern elements about future games in the series, but then, we enjoyed this one. If you hated this game already, evidence of future torment was probably unwelcome.

i can't believe the things you say