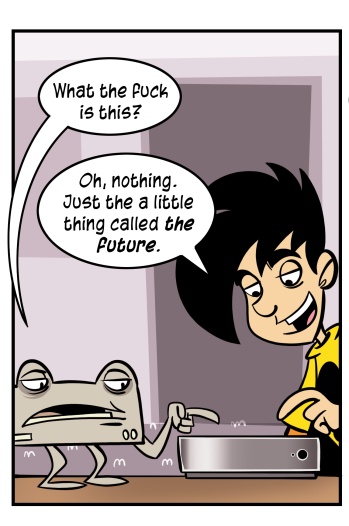 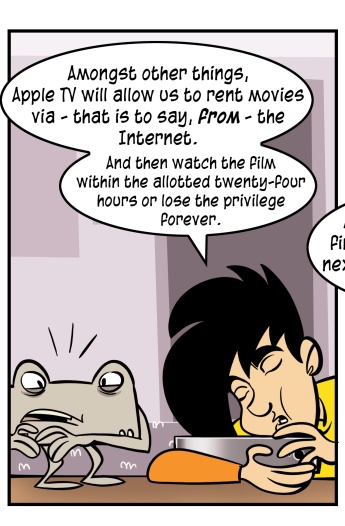 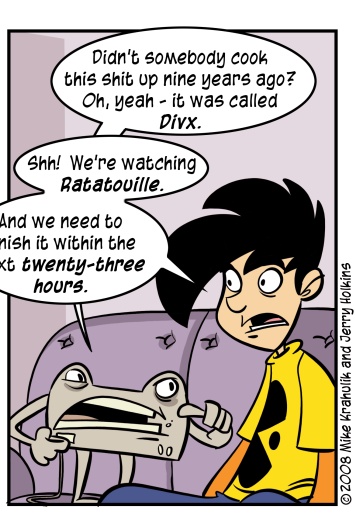 There are those who find something to love in the character of Div, persons who feel that our strip needs more drunken, mechanical bigot. His origin as a disgruntled Divx player is most likely lost to time, particularly since Divx means something very different now.

Divx players could play DVDs, but they could also play Divx discs, which were promoted as a something between a rental and a true purchase. The discs themselves were cheap, and allowed for the viewing of the film in a 48 hour period once you started it. You could then unlock the disc permanently for an additional "purchase" fee that took into account what you had already paid. The strangest part about it was probably the modem - yes, a modem - that it used to manage its DRM. I don't think we were using the term DRM in 1998, but that's how we would have described it. Divx was at the center of the first real flamewar I had seen online, citing things privacy concerns and the limitations it placed on the consumption of media. I'm not sure it was ever going to work. The idea that you could never really own these discs was a strong point of contention, but even with a DVD (called "Open DVD" by advocates at the time) your ownership isn't exactly absolute.

It may be that some people are really excited by devices like the Apple TV, certainly the device has seen improvements, but whenever Steve Jobs starts talking about this thing I go instantly into a coma. The duration of this coma is exactly the length of time that he discusses it, and once he moves on to something that is useful or important I am rejuvenated. It is funny, or perhaps sad, but the almost universally reviled Divx format was actually more lenient than today's digital downloads. The partial, limited-use, occluded ownership of the iTunes model is now so engrained that these rentals can be worse than bad, and no one remembers.

When Bizarre Creations dropped a demo for The Club in the mysterious east (by which I mean Europe and Australia), I felt confident that it would arrive here shortly. I picked up a magazine and began to leaf through it, certain that any moment a demo for The Club would emerge. It didn't, and still hasn't, on the PS3 or Xbox Live. Those regions get screwed over with some frequency, so I took this as a kind of karmic reversal. I quickly set about creating "Yuropn" on PSN, a version of myself who lives in a manor house in Congleton, Cheshire, a man whose noble blood would grant him rights to the demo. After playing it for several days, in every mode, multiple times, I think it makes up for the slights they must endure the rest of the year.

The subset of the game they have exposed is flawless. Imagine an incredible, high-fidelity shooter level, cut into distinct routes the way cities are in PGR or Ridge Racer. Add to this the classic play of a "shmup," where enemy patterns, precise control, and iterative strategy maintain full engagement throughout each level. Affix to this pristine Goddamn marvel an almost rhythmic combo structure that ties deeply into these other systems - one where killing at a certain rate is key. Art and technical execution are... perfect.  That is the word.  If I'd seen this thing months ago, I would have bought these fuckers, too.

I get probably fifty press releases a day, and I almost never pass them along. Since Odin Sphere, though, I've been paying very close attention to the stuff that comes through Atlus. Baroque (Wii, PS2) looks to be a kind of dungeon crawler, at least, as near as I can tell, but the fiction and art they've put together to communicate the setting really resonated with me. I started reading it near the end of the day yesterday, and by the time I looked up, everyone was gone and the lights in the office were off.

i'm gonna pin you down 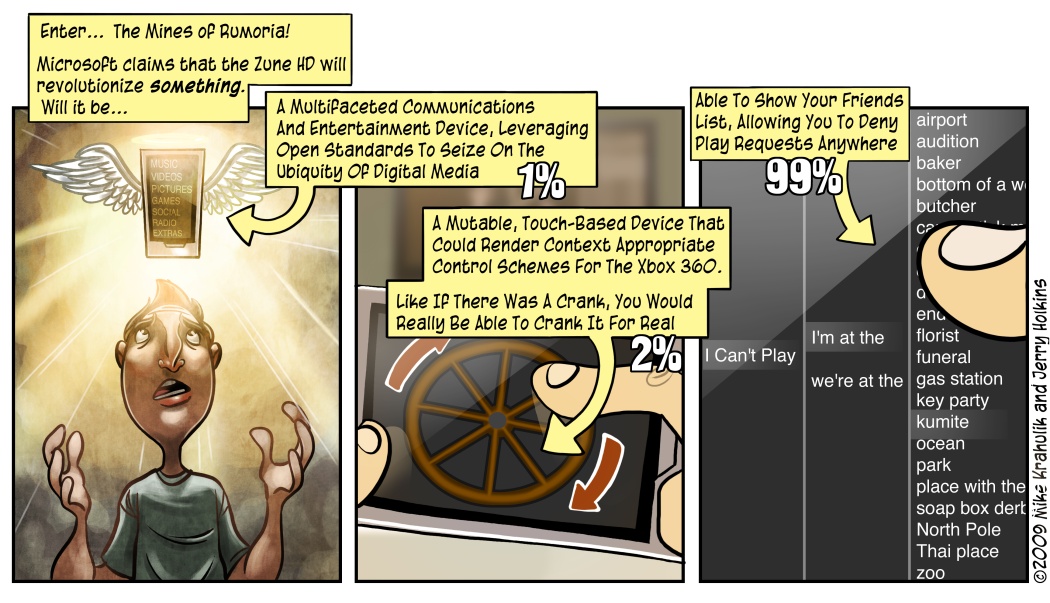