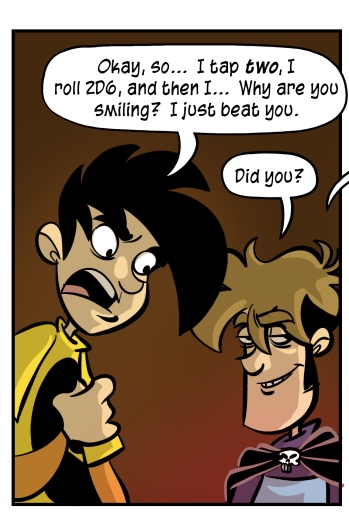 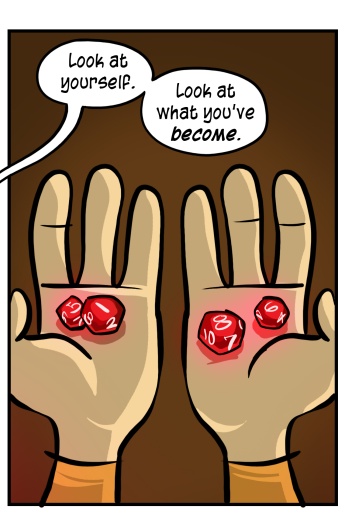 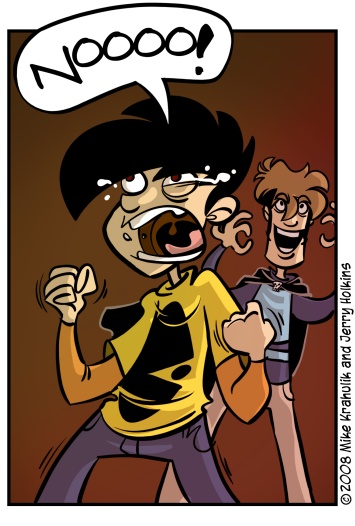 I can remember when it started, truly started. Chits were no longer sufficient to really encompass the hitpoints of his most powerful Pokémon cards, so he began using a d10 for the first digit.

After that, it was only a matter of time.

Perhaps the dice themselves evoke something, that their shape refracts the structures of life into their numerical girders. At two o'clock in the morning, he began to argue (with much heat and light) about the possible interpretations of a particular card and its grave implications. I saw the rules lawyer well up in him, a hunger for the bright, certain shapes of clean systems and the dark shadows they cast.

Eventually, even these wide realms will no longer contain him. He'll want to do something those iconic mechanisms could never describe. When that happens, I will unfold my DM's screen, fix my clasp, and tell him that he can feel the wind from the northeast.

The parallels between this particular CCG and traditional roleplaying games are pretty strong, leveraging (as so many have) workhorse, fundamentally gygaxian systems and terminology. If you haven't spent time with the more sophisticated card games - perhaps because you fear their terrible, ineluctable gravity - it may be that they look like an extremely expensive version of Slapjack. The distinctions melt away pretty quickly when you start looking at a constructed deck, which has all the careful feat and skill choices you'd see in any other pen and paper context. Even dice rolls are modelled by the card ratios and deck sizes. If you're playing a raid deck, there's even loot for fuck's sake. That's why I said (after playing it the first time) that there is a game here for people who typically gather around the table for another purpose.

Wizards was afraid (and rightly so) to meld their primary expertise with their newly acquired Dungeons and Dragons, as so many feared they would. In doing so, I think they may have ceded a generation. Paizo's GameMastery products seem to argue for a measured, hybrid approach. There's a profound opportunity here, I simply wonder who will grasp it first.

The contest entries are piled so deep that it's going to take the better part of the weekend to sort them - our thanks to everyone who offered one up. Hopefully we'll be prepared for an unprecedented triple coronation on Monday.

the best game you can name
Random Comic
???