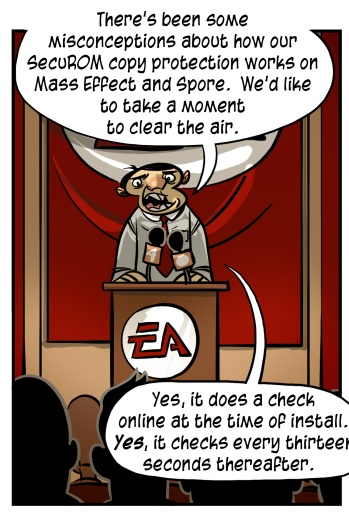 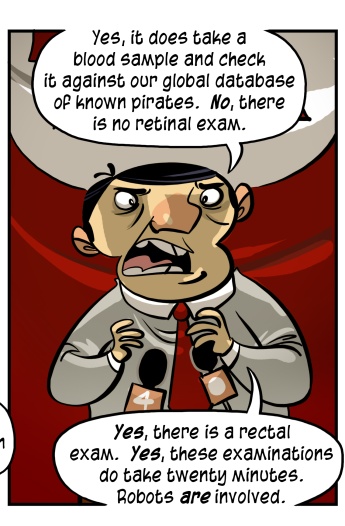 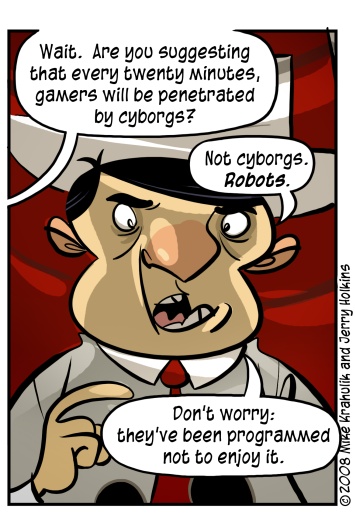 Gamers don't agree on a whole hell of a lot. You can't even get them to agree that, in general, pirating software is bad. Some people simply won't concede it. Forget trying to convince them that it's bad - you'd have hard time getting some people to admit that, in some very rare cases, piracy is incrementally less than good. It's not difficult to find truly exultant tales of piracy that brim with the zeal of true nautical adventure. It is as though downloading illicit ISOs is the only way a man can truly exert his will on the flexing, undulating evil of a corrupt universe.

You can't get them to agree on the Lifebloom coefficient, they won't see eye to eye on snaking. There are still people who see the console "lifestyle" as a debased thing that diminishes the medium. If you were to bring up the PS3 and the Xbox 360 in a way that doesn't slur and laud both systems with full equality, the great likelihood is that you will be stabbed through the lung and die.

The one topic upon which there is any consensus at all is that SecuROM copy protection barely deters piracy, and makes life more difficult specifically for paying customers. That was true even of the run-of-the-mill version we'd been exposed to before, where depending on your specific hardware configuration games might run poorly, assuming they ran at all. It's the sort of thing that makes a person invest their leisure time with other machines, or - and this is awesome - pirate games they have themselves purchased by circumventing the check with a cracked exe. This is something I do almost one hundred percent of the time, because I can't be sure I'm receiving the full value of my hardware if I don't.

The mechanism EA is utilizing on their newest, big-name PC plays is even more eldritch than the previous iterations, and there are people who hated the earlier versions enough to boycott games that used it. It now phones home every ten days or so to verify that... God only knows what it is verifying, or how. I'm afraid.

Why use it, then? Why make use of it? As a publicly held company, they can't do nothing - I'm an adult, I get it. Even so, I think we'd scoot the line back over toward Liberty. The group of people who even perceive things like SecuROM must either be too small to take into account, or they think people will buy the game anyway.

I okayed ads for Mass Effect on there PC because I liked the game, and thought that - free of the resolution and storage restraints - it could be substantially better than its console counterpart. I wasn't aware of this mechanism at the time, and there's no way I could have been. I apologize. I still endorse the experience they've chosen to bind up in this way.