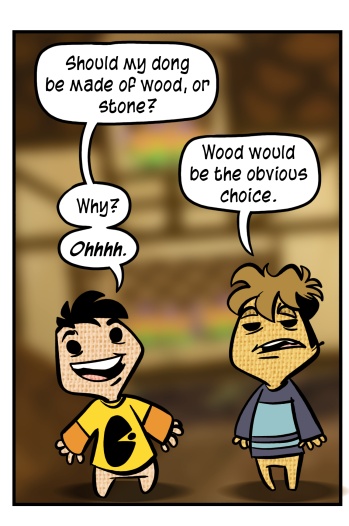 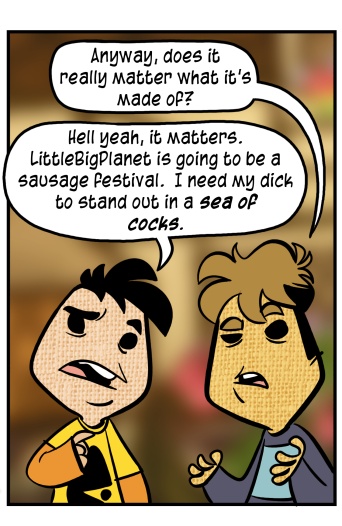 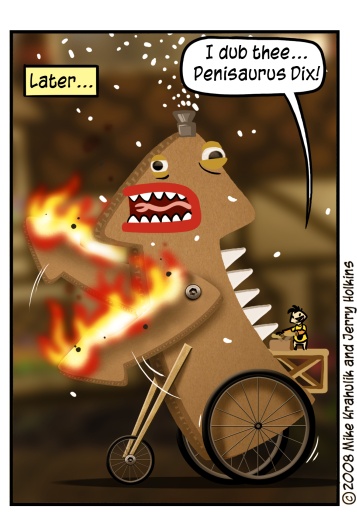 I was able to coax Gabriel into hauling in his Playstation 3, where (upon launching LittleBigPlanet) we began humanity's greatest working.

In truth, no coaxing was actually required. He is as vigorous a proponent of the game as exists anywhere, in any nation on earth, or even among those creatures who drift on the cold breath of stars. He'll talk your fucking ass off. I thought it might have been an art thing, where he was enamored with the idea of a game as a canvas or some shit, but that's not it at all. My biggest concern with this whole enterprise was that, in the manner of some grim celestial event, the game would get lost in the tools. It hasn't, and the fact that it hasn't is nothing short of miraculous. There is a legitimately fun, multiplayer platformer nestled at its core.

If I am ever called upon to distill 2008 into a handful of incredible moments, one of them would already be from LittleBigPlanet. We were playing a user created level that, upon reaching the penultimate stage, tasked players with flying a zeppelin to the finish line. The author of the level had made the zeppelin from scratch, and it sported four levers that controlled movement in each direction. Kiko had died already (fire), and on the eve of my triumph, I fell from the zeppelin to my death. At this point, it was up to Gabriel to captain this thing all the way to the end. That's the gameplay. Visually, the sight of his sackboy running back and forth on this ship - madly pulling levers in an attempt to control this thing by himself - was beyond delectable. It demands to be counted among the year's richest moments. LittleBigPlanet is a game where, particularly in multiplayer, rich moments are in ready supply.

There is already a two part series of levels called Construction Time, which fall into the "Mechanical" category - gameplay that relies heavily on the manipulation of author-created machinery.  In a level that mixed color matching and "toy crane" mechanics, we had four players but only three levers to control. You can make your own fun in these situations:  by holding down either trigger, you get full analog control of your sackperson's arms, and by tilting the controller in different directions you control the tilt of the head. The d-pad controls emotions. This is a more than sufficient palette for puppetry, and I managed to create a ridiculously imperious little "foreman" to direct the others. The Sixaxis face controls have a strange, secondary effect, in that the way a person naturally holds their controller effects their avatar's behavior. Gabriel naturally holds the controller upside down, under his chin. As a result, his sackboy is constantly looking up, lost in thought.

The tools themselves are easily grasped, but when you pick one up, it blooms into a hundred thousand possible forms. Their scope is quite frankly beyond us, and any fantasies we had about ginning up surreal Twisp and Catsby realms for frolicking purposes quickly drowned therein. When I look at this bizarre difference engine someone made with the tools, I start to see spots. Blood drains entirely out of my brain, and I begin to tingle in my extremities. Even so, we derived tremendous enjoyment from the tutorials, which turn learning the tools into a series of little puzzles. They're voiced by Stephen Fry, whose jolly wisdom seems to inform the entire production.  Anyway, we don't need to use the tools.  The game isn't even out yet, and there's already more levels than you could ever play. 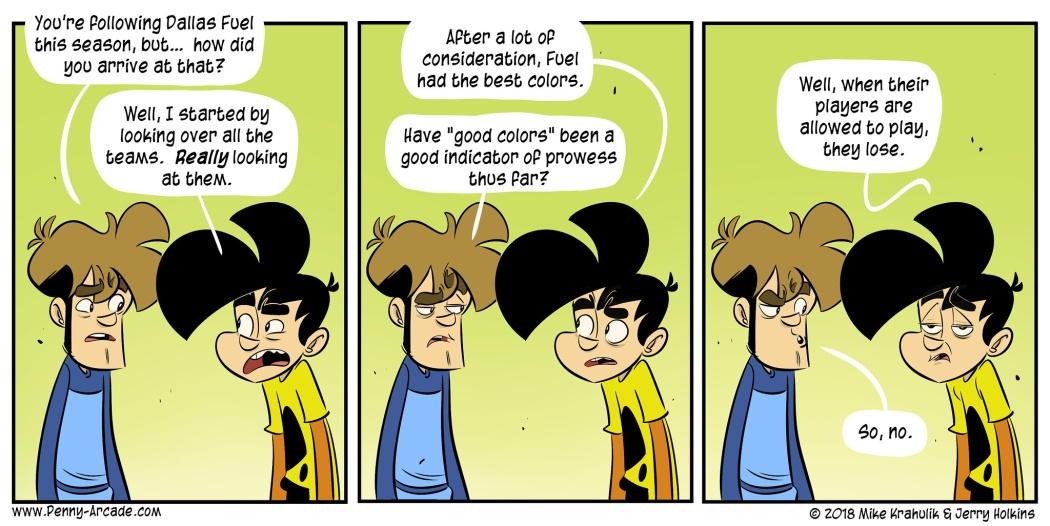