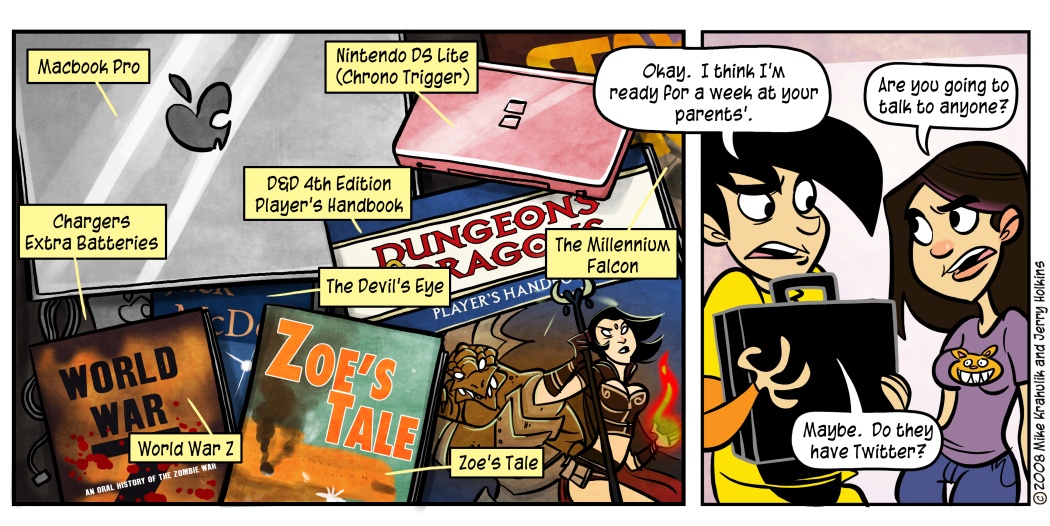 We go back to Spokane every other year for Christmas, and each time the town has sunk deeper into its abscess. The Earth's ribs jut there, greased along the edge with black oils that give dark dreams. In the damned orchards where the rank hatefruits droop, farmers fight its very soil - tilling up more stones than earth. There are always more. My heart is like this: stones, and stones, and more stones underneath.

Everyone must gird their loins to some extent when returning home. In Gabriel's case, the goal is to make his loins absolutely impervious.

Is there a single person who found something to enjoy in that "first video footage" of Star Wars: The Old Republic? I heard the same incredibly tired, bulk bin message discipline, only this time it was stuck together with context-free wads of video.

They're continually telling us about their mystical Story Pillar, and how other online role-playing games don't have story, but this is a flatly ignorant statement. I don't believe they said it out of malice, but sometime prior to their presumptive coronation they may want to consider playing games in the genre. Independent of developer intention, narratives spring quite readily out of social play. Asheron's Call has not only story but time, with updates almost every month to progress the world. If you've checked out Wrath of the Lich King - a dangerous act, surely - you know that the new expansion is radically unlike their previous attempts, and leverages new technology to deliver a kind of narrative that players progress on their own schedule. When Bioware talks about grievous decision making in real-time that will forever shape their character, I don't think that's what people actually want in this kind of experience. Games of this kind get codified very quickly, transforming your best attempts at story width into golden, optimal paths. We don't know what it actually means to make story central to an online game you can play with friends, who are themselves in various states of completion. We don't know because they haven't actually said.

The image of an ignited lightsaber is an icon with tremendous power, but it's one way of being in an entire Goddamned universe. It looks patently ridiculous to strike a monster more than twice with an infinitely sharp laser beam, and the whirling idiots in these clips look like they're auditioning for Thriller. There was once many ways to explore this setting in videogames, as the pilots, mercenaries, and soldiers forced to live in a place where insane monks engage in perpetual religious war. It's the better story, frankly.  Bioware has their work cut out for them.