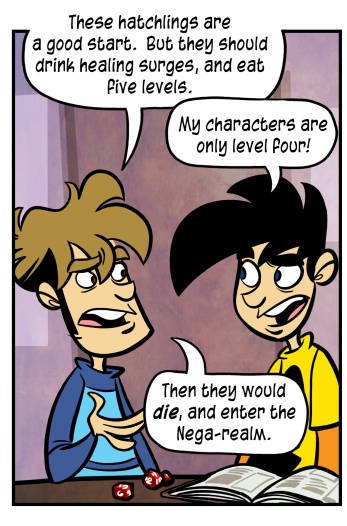 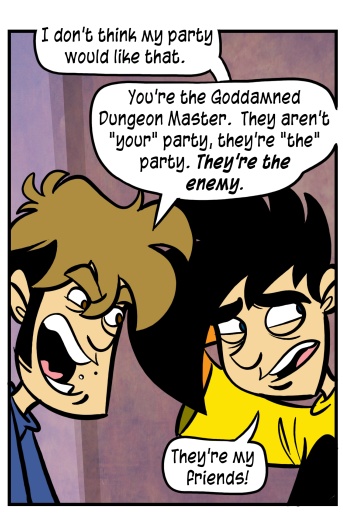 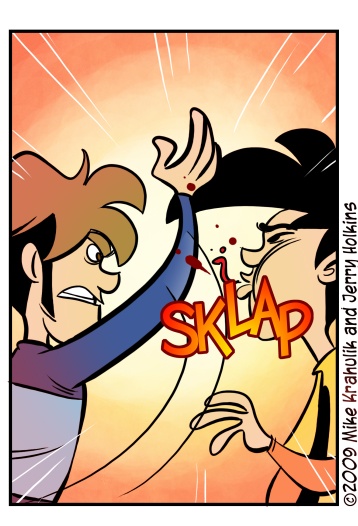 I don't play in Gabriel's campaign, and I don't run it, but still I am present. I am there in the eager, thirsting roots of the gravetree, in every primal ululation of some forgotten race. Whenever he runs something by me, I am quick to suggest that it could be substantially more brutal. His group can scarcely believe the stories I tell them about earlier versions of the game, of sundered stats and experience loss and THAC0, when players could win and still lose.

In a bizarre twist, you can actually listen to the writing process for this comic by clicking here - just as men did in ancient times. Subscribers to the feed have probably already listened to it, as well as the additional podcast I put in for last Friday's "The Whedonite's Dilemma." I'm hoping these means we've gotten back into the swing of things. The microphones felt like interlopers for a little while. Now, they are simply furniture.

With the campaign soundly defeated, last night was slated for Killzone 2 multiplayer - at least, in a theoretical universe. In the actual universe, the one we are doomed to exist in, PSN was intermittent, and a combination of hard locks and crashed servers obliterated an entire evening's progress.

Inconsistencies and inconveniences are really starting to overshadow my enjoyment of the game, which is unfortunate, because this is the game I want to play right now. People (particularly PC enthusiasts) often wonder why party/automatch systems came into prominence, and Killzone 2 provides a compelling case. The game does feature a "join friend" option, but you're likely to be put on the opposite team, especially if you join at the same time. If the server doesn't allow team switching - and most don't - there's simply no recourse. You might not be able to join your friend at all if they're a different rank, even one below, and they happen to have been automatched to a rank-locked server. At my current rank, I don't even have any special abilities - and I still couldn't join.

You might be wondering why you are reading this here, and not at some other place that deals in information relating to the medium.  It's not especially complex. Now that the reviews are out, the journalistic machinery is finished with it - their responsibility to the consumer having been concluded. What a magical state of affairs that must be.

this thing that i've become