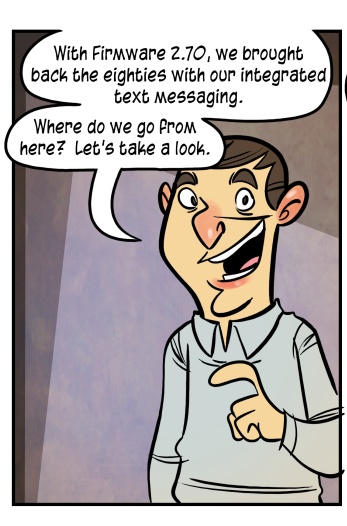 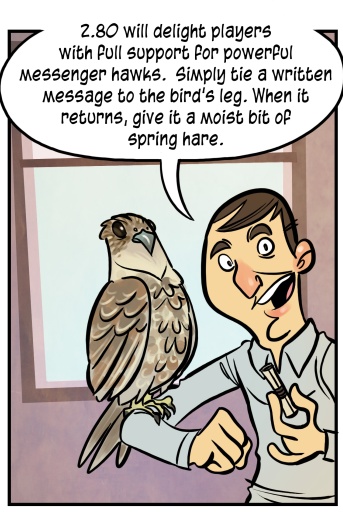 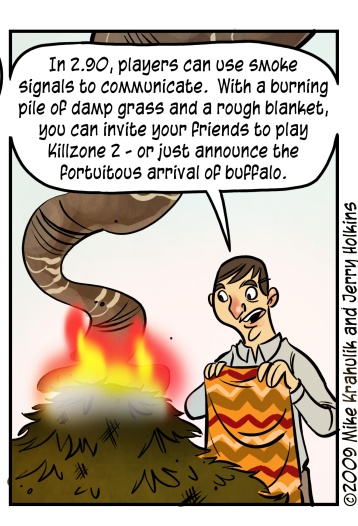 You have to wonder what toxic gases are seeping up from the foundation of Sony's American headquarters. What mysterious compound, when affixed to a functioning brain, would warp perception to such an extent that this constitutes an invigorating communique? Can anyone tell me - does any man know - the precise trajectory of this platform?

Two and half years into their ordeal, it's hard not to imagine owners of the Playstation 3 marching in a ragged, serpentine column toward some promised yet thoroughly imaginary Kennaquhair. Is there someone at the tiller of this brand? In my mind, nature has already begun to reclaim their workplace - CAT-5 and tangled vines matted together in an impromptus drape. Were I to call corporate, the phone might be answered by a curious macaque.

When I see people talking about how great it's going to be creating text chat rooms on their next-gen gaming system, the extent of their Stockholm Syndrome becomes apparent. They have begun to empathize with their captors. What normal people want is voice chat.  And they want it inherent - available throughout the experience, an assumption. It's entirely possible that Sony doesn't understand the importance of the feature. I don't actually believe that, but I'm feeling bad about the stuff I wrote above and my better nature is beginning to surface.

Something people love to say about the Xbox 360 is that idiots are in ready supply, and they are not wrong. This is what happens when everyone has the ability to speak: in a democracy, every jackass gets their turn at the microphone. Less often, this conversation runs all the way to its conclusion: that exposure to these fiends is entirely optional.

On the PC, we used BattleCom, GameVoice, TeamSpeak, and Ventrilo in succession to enable LAN camaraderie from our disparate hovels. Even when voice support became de rigeur, we still hosted our own chat. We weren't there to talk to strangers.  I still find talking to disembodied strangers online very difficult. It makes me rub my molars together.

That's why pervasive voice is crucial: it lets you mute the entire service. Now, every server is a private server. I don't want to go point to point, independently muting each racist. I don't want to prune and tend the Goddamned thing. I'd just like to play games, if that's alright. An optimal evening for me doesn't involve playing whack-a-mole with my voice channels in some Sisyphean effort to elude pre-teens.

Sorry about the late post: Scott Kurtz is in the office, and he is too interesting. He's up this weekend for Emerald City Comic-Con, which we'll also be attending. We can be found at booth 102, if you are not already completely sick of our bullshit.

crash into the sun