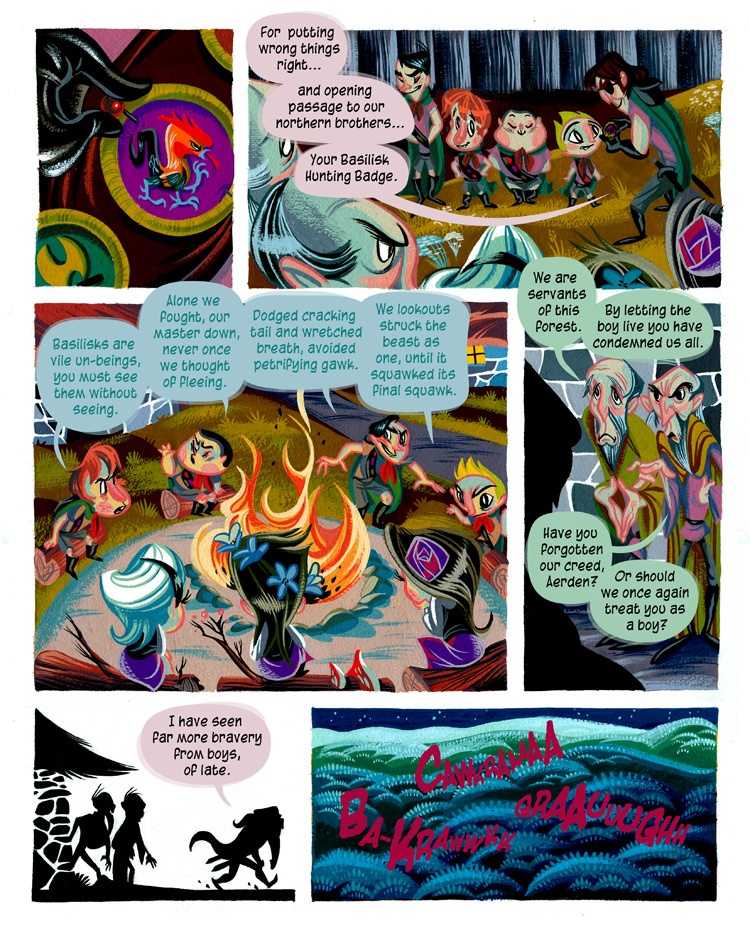 With this, the fifth and final page, Lookouts comes to a close. Unless it gets optioned or something (!!!), it might be a while until we come back to it. On the other hand, with any luck at all, Automata will drop before the month is out - covering our absence during San Diego Comic-Con. We'd like to thank Becky Dreistadt and Oliver Grigsby once more for their investigation of the nascent Lookouts setting. Getting another take on it has educated us immensely, and I feel like we could really kick the shit out of a Lookouts comic right now. Of course, this scenario assumes we could collaborate with parallel versions of ourselves to complete it - mad doppelgangers, blessedly sequestered in discrete "columns" of space-time.

You may be glad to know that I've escaped the psychologically perilous "leisure" of the Oregon Coast, so no further leakage of the kind recently exhibited should be on offer.

Any time not spent shaping my heir this week was invested, in its entirety, toward the sustenance of a constantly unfolding sequence of interrelated adventures for Dungeons & Dragons. I've enjoyed my turn as Wormtongue in Gabriel's campaign, acting as a nefarious presence whose contributions are felt indirectly, but an offhand request to DM got me back behind the screen when I hadn't intended to - and now I feel as though another mind is whirling inside my own, and this interplay has as its natural consequence the generation of a terrible power.

Eventually I came to understand that manipulating Gabriel's game was a form of cowardice. Frankly, I liked being the feared entity, the veteran player who regales them with systemic tales of terror from earlier iterations of the game, a malefactor whose competence was assumed without need for proof.  At least, I thought I did. Sitting behind the screen, my notes heaped high with treasure for the virtuous few, it became clear that what I actually liked was telling stories in more or less real time: snaring bits of player conversation in order to make them flesh, confounding people, embroidering every act in an effort to simulate their worthy band at the highest possible resolution.

I'd been so terrified of the responsibility for another person's enjoyment that I'd forgotten what happens when it works: you are inviting other people to inhabit your mind. What a strange use of oneself that is; strange, and rare.

when an angry gorilla cries