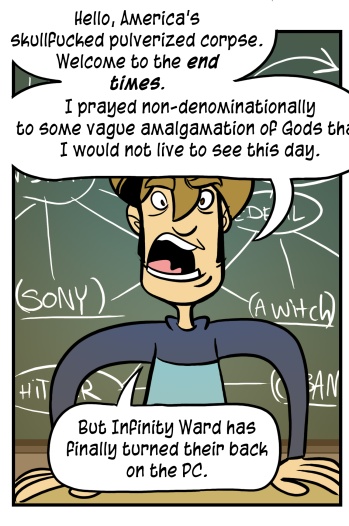 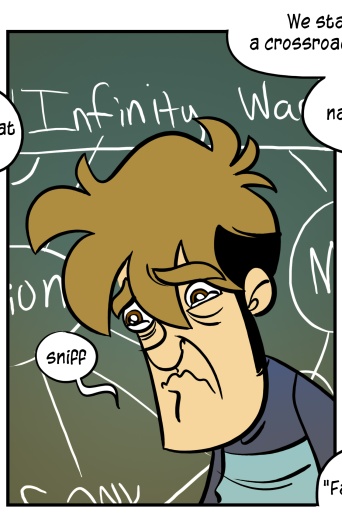 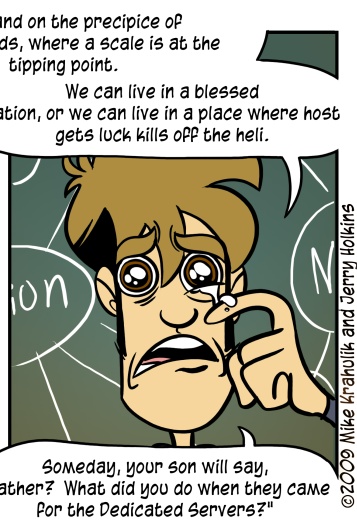 Everywhere the discussion takes hold, the conversation surrounding Infinity Ward's decision to forego dedicated servers is an absolute fuckfest. I understand why it would enrage that contingent. It's an aggressive assertion that the universe is not as they claim.

On Four Zero Two, Robert Bowling's clearing house for Infinity Ward PR, the thread quickly reached one hundred and nineteen pages. The petition at the core of the conversation, entitled "Dedicated Servers for CoD:MW2," has (at the time of this writing) reached 143,991 signatures.

To read such lamentations, you'd get the impression that PC gamers still think they are the focus of the industry, when that hasn't been true for awhile. Indeed, hardcore gamers in general - and the dedicated PC enthusiast, which is a subset - haven't been the object of their desire for some time. I was under the impression this was well known, but it does require a willingness to perceive factual information, which is not a universal trait among cultists. Maybe if you had just put out, instead of becoming a signatories to a vow of consumer chastity, the old twinkle might return to his eye.

I've invested a few more rounds into Uncharted, as part of my penance for expressing an opinion - and then last night I loaded it up just to play, without any ulterior scientific aspirations. I get it now, and enjoy it - but it is still challenging for me to play, and not necessarily on account of brutal opponents.

Basic legibility is a concern with the game, but it's not entirely their fault. Killzone 2 looked good, absolutely, but it was a different sort of good than we see on display in Uncharted. The game is very linear in general, which I would resent more if it were not so beautiful, capable of overwhelming the bandwidth of my optic nerve. But there were times during my experience, more than one, where I could not find my way out of perfectly obvious rooms because the fidelity was so high. I was lost in them like I would be lost in a real place. As an incredibly young person playing Mean Streets on the Commodore 64, I wondered when we would achieve this kind of authenticity, and whether it would even be a service to the medium. I don't know, but Uncharted 2 is a great place to begin the discussion.

This same thing occurs with some frequency in the multiplayer, this state of overwhelm, where split-second timing is crucial. There is a player model you can unlock, a mostly transparent skeleton, which only compounds the problem. The environments are rich with design, interactivity, and lousy with enemies, so that multiple nights are required to get your bearings.  More than half the time, I don't even know that I'm near a pickup, so great is their devotion to a realistic aesthetic.  Any new game has an acclimation period, certainly, but I've never experienced a confrontation like this where scale and density are my primary foes.

Where in the hell did Panzer General: Allied Assault come from? I mean, I know from a purely technical standpoint - I assume it was made with the use of a Xbox 360 Development Kit, and I know that these men were responsible for its manufacture, but I want to know what nexus of potentialities culminated in the rebirth of a venerable SSI franchise as a digital boardgame. The demo includes a tutorial mission and the first mission of an Allied campaign, which is more than enough time to know if they're doing something you like. I'll leave it for you to determine whether or not World War II recast as a tactical CCG is something my very bones would desire.

i will stay long gone