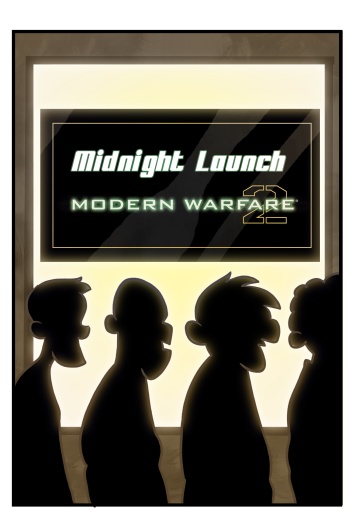 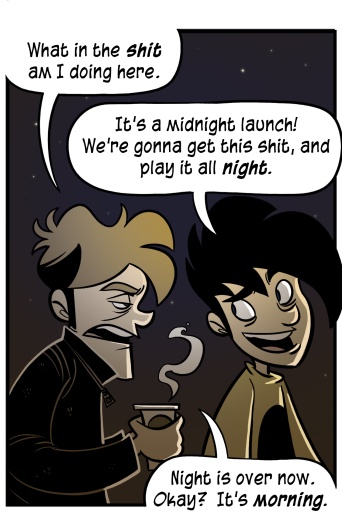 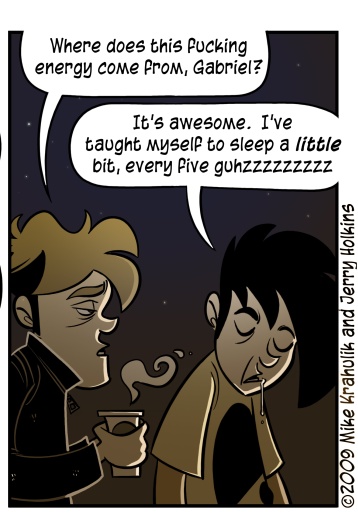 I once made it a point to attend midnight launches, if for no other reason than it offered an excuse to hit Dick's on the way back - around one o'clock or so - when that unassuming burger window becomes the capital of a spontaneous nation.

Outside of something like PAX, though - a phenomenon which is about to become more common - being in the presence of those who share my affection for games is rare. We are decidedly unlike the "key demographics" which are the precise focus of this industry today, that is to say, frat boys and disaffected young men - we've even made derisive comics to this effect. I choose to believe that there is value in exposure, if only as an inoculant.

Even if we did go get it, and by It I mean Modern Warfare 2, by the time I got home most of my primary functions would be in the process of shutting down. Assuming I could insert my key in the door, could I turn it? And having turned it, could I manipulate the knob so as to gain entry? This is all to say nothing of putting discs in trays and commanding the phalanx of remotes required to actually play anything on my system. Is this why matchmaking was invented? To give one-button respite to the drunkard, the derelict, and the decrepit?

I spent much of the weekend thinking about the in-game sales force Bioware leveraged in Dragon Age, mostly while playing Dragon Age itself, and I'm not unsympathetic to the challenge they face. They make games which take a billion years to develop, and represent the output of more than a hundred sentients, but when their competitors make a game where you shoot nazi zombies they're somehow able to parley that into tens of millions of dollars in DLC. Bioware is in the business of making more complex, more sophisticated entertainment and then harvesting a diminished return, which ain't no kinda bidness at'all.

Narrative games don't slot as easily into the DLC model. I complained about this with Mass Effect's DLC - and I loved Mass Effect. But I'd already played through it, and I don't need an expansion after the fact. I loved Fallout 3, as well, and I never bought any of the DLC. Offers for both games are out of sequence, from a narrative perspective. Even if I wanted to see this content, which I do, something with an almost physical presence keeps me from revisiting a story I've completed. Fallout 3's Broken Steel campaign - which behaved more like a traditional campaign expansion, a la Brood War - is probably the right model, but I still didn't bite. I like games too much. I had already moved on.

I think they handled it poorly this time, but there are workable models out there from people who are trying to manage some of the same problems. There's no question that the episodic model is impossible for most to adhere to, but Telltale sells the entire "arc" of the new Monkey Island as a chunk. That's all these pieces of content are, Episodes. That's more or less what I'd recommend here - "arcs" of content over the promised two year span, that I can choose to buy altogether. Let me sidestep the piecemeal aspect and commit; make one decision, and not five. That's what I thought I was doing with the Collector's Edition, more or less. There's a smart solution for this, a wholly new one, one that sews together the major franchise releases with hooky through lines of authentic storytelling.  Offers which could never be mistaken for the one-off novelties that currently make up the bulk of the space.