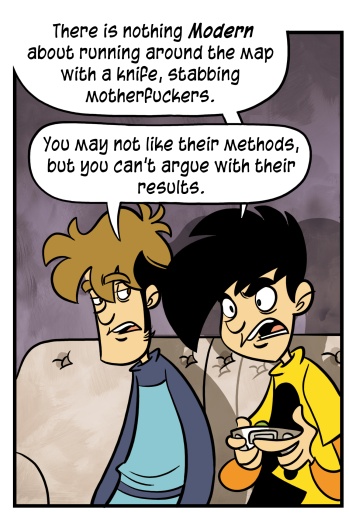 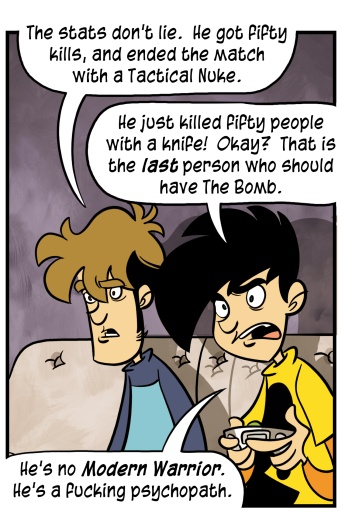 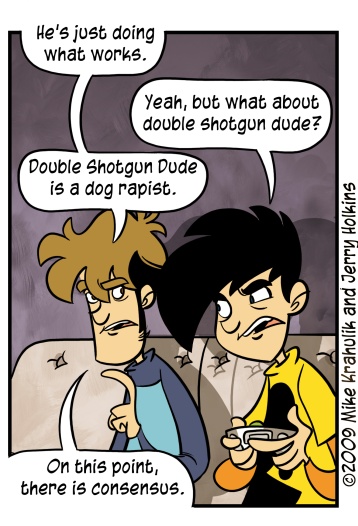 There is a build in Modern Warfare 2 - Tactical Knife, Commando, Marathon, and Lightweight - that we have taken to calling the Witch. They are so called because this nefarious combination results in half-human abominations that can a) run faster than normal, forever, b) fall without damage, and c) teleport to targets killing them instantly. If you're wondering what something like this is doing in a "shooter," whose name ostensibly delineates the standard mode of interaction, well, let us know what you come up with. We're thinking about starting a support group.

Looking at the rest of the game, the knife is designed to be a reset. Like two misbehaving children, the use of it puts space between the two players, reverting to the optimal ranges of interdiction. Gears of War offers a similar mode of resolution, but in exchange for your chainsaw kill, you've got several seconds of full paralysis while the animation plays out - a few seconds you typically don't survive. By contrast, in Modern Warfare 2 - a game which, whatever liberties it took during its narrative, is not actually science fiction - allows players of infinite stamina to teleport and murder people.

The game's entire knife dialectic exists outside of the game proper. There are so many ways to make fine adjustments to your damage output with firearms that blades doing what is essentially infinite damage makes the rest of the game look like kabuki.

As mad as I'd like to be at these wicked sorcerers, I can't be - not really. All they've done is turn the game's subtext into the focus. They haven't modified any binaries. They're simply playing the game as delivered. We lost a single round to these kinds of tactics, and haven't lost another, but they turn it into some other game I don't have a lot of interest in. I wouldn't like it if a Chaos Marine drop pod landed on Highrise, either. Actually, that might be okay.

I'll get back to you.

Don't forget that in Medal Of Honor: Allied Assault - back when the guys who would found Infinity Ward were still at 2015, Inc - the retail build of the game allowed you to use the single player cheats in online games. You had to pull down the console and enter in a few words of power, as was customary in those days. Perhaps this is merely the evolution of that philosophy; a sort of populist, turnkey dominion.