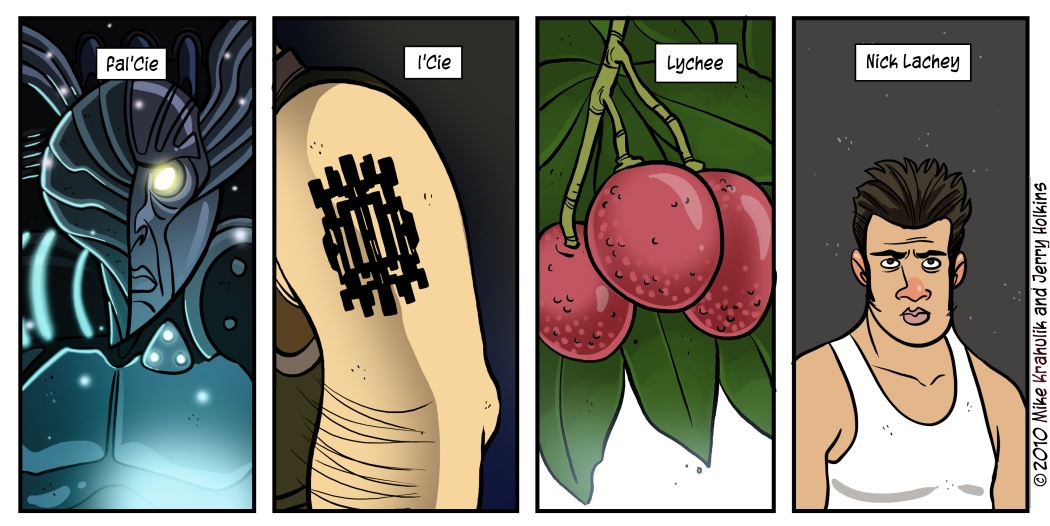 Kiko and Gabe are here, talking about Final Fantasy XIII, and I am on the absolute periphery of it. Did they receive a different version? The game they're playing sounds pretty good.

There's a lot to keep track of, the worlds of Cocoon and Pulse have a unique cosmology, which is why we have offered up today's strip - to help anchor you in that unique context. And you may need anchors, desperately, because you might find your attention beginning to wander.  Imagine my surprise when discovering that the dude with a chocobo literally roosting - roosting, sir - in his afro is the only character I have any affection for. I don't understand the thinking behind giving me lead characters, which the narrative can slowly alchemize into gold. Why don't you give me gold characters, and then refine them into platinum? I mean, if we're absolutely dedicated to transmutation? God, I hate these fucking people. I don't give a shit what happens to Sulky, Twat, Twit, Pip, and Marm. Sometimes, I kill them on purpose.

We have at times considered the plight of the games reviewer.  Forced by the mechanism to consume games, because more games are coming, cresting the hill, and these games must be consumed also - but at least someone is compensating them for their time.  I considered loading it up last night, just as I have every night since I got back, and I could make no cohesive argument for why I should do that and not something else. It's horrifying to think that I had defeated Uncharted 2 by this point, traversed a full narrative arc, in the time it took me to hate Final Fantasy XIII.

Historically, the arc is as follows:  I write something strident, as I have above, which creates sufficient guilt to power a complete playthrough.  I am asking you, now, to imagine the apology I would eventually write, and mercifcully truncate this process.

You might have heard that we were at GDC at the tail end of last week, there to receive something called The Ambassador Award. We didn't know about the award until we were in a position to receive it, which seems kind of gauche, but at that point they had all agreed to confer it upon us.  The guide had been printed!  The machinery was in place, and course correction would have been inconvenient if not impossible.

It had been our intention to be smart-asses, as is expected of us, upon reception of the award; after entering the hall and finding our seats, we realized this would be quite impossible. We had no desire to denigrate those proceedings further, our presence alone being the first act of violence. GDC has a culture of its own, you can feel it when you enter the building, when you enter the block that the building is on. It's a zone in which the commentariat has no rightful place, and we took care to tread lightly.

I will eat you alive