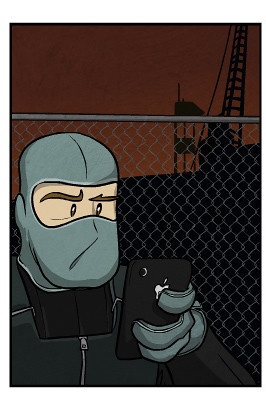 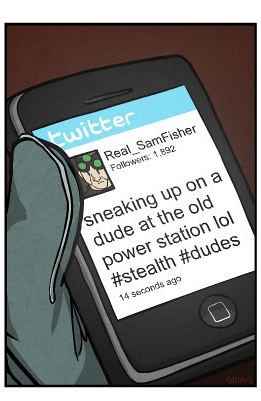 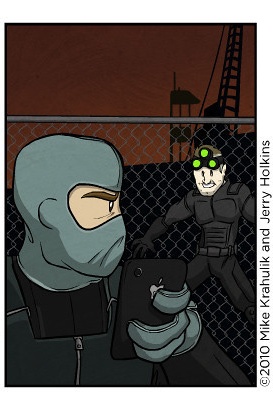 If there is a bigger Splinter Cell fan than myself, I haven't yet met them; but in their zeal to promote the newest iteration, Ubisoft has caused Sam Fisher to tweet. And I don't mean they've made him chirp, which would be preferable. They've given him a Twitter account where he tweets in a supremely earnest way about how tormented his shit is.

This is something you've got to be very careful with. It's possible to make something like this work, but (ironically for a marketing maneuver) its connections to the "product" need to be largely oblique - it must manifest a more subtle objective. You can't have your game's protagonist posting screenshots, and he absolutely one hundred percent can't formulate a link to the game's promotional website(!!!).

It goes without saying that live status updates and furtive stalking may be deeply incompatible.

(That is a link to the comic there - specifically, on the words "deeply incompatible." Now, when you see the art, don't be alarmed! It has been drawn by our friend Kris, whose Blamimations men are said to crave. Gabriel was barely conscious when I spoke to him yesterday, so ferocious was his illness.  I was forced to trawl the roster.)

The demo for Splinter Cell: Conviction is a fascinating thought exercise, and one I would suggest you undertake.  They've done the Ubisoft Thing, and you'll know what I mean, where in the course of trying to make something more streamlined they've managed to invent some new kind of complexity.

I've been trying to see what people think of it, on account of it being so weird, but there's one or two posts tops before the thread ceases to be about Splinter Cell and instead becomes a discussion about Ubisoft's DRM scheme.  If it sounds like we're about to embark on another discussion of Digital Rights Management, we're not - though as a topic, it almost always warrants it. I mainly think it's sad that instead of engaging with some of the interesting ideas in their newest games (particularly the completely naked boardgame underpinnings of Ruse and Settlers) every discussion quickly struggles to include all the necessary genuflections.  Ubisoft brought it on themselves, certainly.  I just think DRM is less interesting, as a rule, than videogames.

The discovery of an artist's work after their death, the phenomenon of Outsider Art, is typically confined to traditional forms of expression. It's what we know to look for, in any event, which makes it easy to find. I expect that we'll begin to find entire games under the same circumstances, and I weep for those we have already lost, but it is in this new era that we will find things like Platinum Games' Infinite Space.

This is the work of a madman, a madman, but I can't discern exactly where he lies on the adjusted Light/Wily index. He tells me unimportant things constantly, and then hoards the vital data I need to survive in fucking space.  I don't know if he is buffeting me with this inscrutable shit because he is a base and vile aggressor, or because he wants me to see what he sees, and he believes that my having a concussion is the prerequisite.

you never looked so sane