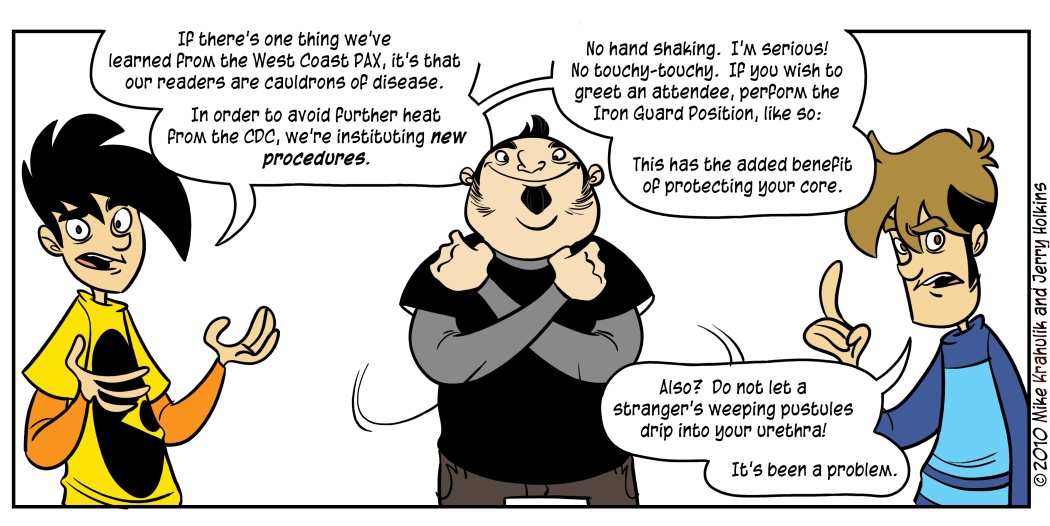 We had a problem with viruses at the last PAX - specifically, they were multiplying inside people's bodies - something this comic attempts to rectify. Whatever. Listen: have you heard about EA's new devilry?!?

This is what digital delivery was supposed to result in, before it had materialized, and some of it even came true: inexpensive games, smaller games, games a la carte. Do you remember the original Gran Turismo 5, which sported a completely fragmentary version of the typical experience? That's just what people thought was inevitable back then. It turns out that the people who actually buy games hate this kind of shit, but who knew?

This is where we are right now: the middle place. Transition is always a challenge, both for we who partake of the medium, and for those who create it. Do you remember the Nintendo 64, where you had to make a choice between force feedback and video RAM? Transition point. I'm sure Bethesda is getting tired of being the go-to example for microtransactional excess, but Horse Armor.  It's easy to see these things as aggressive acts, and they are occasionally mercenary beyond reason, but the reality is that no-one knows what is going to work when these new channels creak open.  Companies simply fail, and die, until their corpses form the bridge to the future.  Experiments explode on the table, often, and glass gets absolutely everywhere.  We are years into this generation, now, and none the wiser.

Nearly universal Internet was supposed to usher in an Elysian realm where fat plums fell right into your palm. Instead, it's created a bizarre warzone where publishers are forced to sell parts of games, because selling games entire would result in reprisals at retail. Selling content after something hits the shelf is difficult, even for great games: Mass Effect 2 is one of the best I've ever played, but I don't see myself picking up the Kasumi DLC. I played ME2, and I loved it; now I'm done. I'm not saying you need to be sympathetic to their aims, but it can help to understand why these things are happening.  There's a scenario for pre-game DLC (epitomized by Battlefield 1943) that can morph into a complete product, is possessed of its own character but can build on other game, and isn't an abomination - but that's a very complex dialogue, and the people who should be having it rarely speak directly.

Let us put it aside for now:  PAX is nigh!  Hail, Enforcers! Hail friends, new and old! Let us be about our strange business; let us concern ourselves with the founding of a culture.

a million miles below their feet