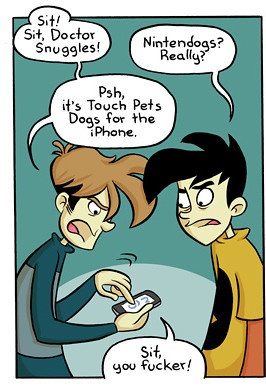 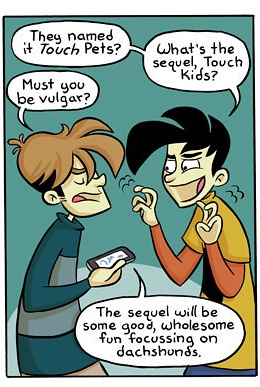 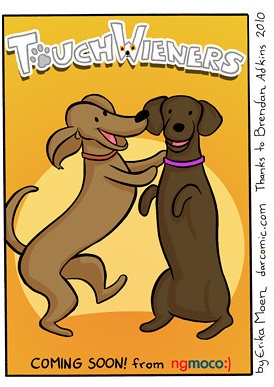 There was a point after PAX East had come to a close and the second leg of our book tour was underway that we began to understand we had fucked up.

There were not many opportunities for this sensation to exert itself, our heads only rarely bobbed above the surface of our responsibilities, and every loose moment was invested in readers of the site. We were glad of the opportunity, certainly.  But after being away from our families for longer that we have ever been, at some point we ran out of whatever material we construct these things from. I put the call out early this week for guest pieces, and I've secured a brief selection. Today's is from Erika Moen, whose (deep breath) Dar: A Super Girly Top Secret Comic Diary has sadly come to a close. All the better for my purpose, though: she came through in a pinch.  If you're already a fan of hers, which would be to your credit, she even provided an adjunct to the above work for your refined palette.

Monday's should be the last one for now, it's not a long convalescence by any means. The Iron Guard Position appears to have kept us (and others) in reasonably good health.

Book tours, though:  yow.  When you go to New York, it doesn't really surprise anyone. The position, and one need not state it aloud for it to be well understood, is that people go to New York. It is a destination. Things were altogether different in St. Louis.

I do not mean to say that love was insufficient in that Newest of Yorks, which would be churlish in the extreme. That would be extreme churling, an activity which I understand is being considered for the Winter Games. What I mean to say is that many of the people we met in St. Louis were almost bewildered that we had appeared there, gazing upon us as though we were terrifying apparitions, our spectral flesh scored by the grisly manner of our demise. It was equal parts appreciation and shock, as though we'd just shot a tarantula off their shoulder.  It was our unalloyed pleasure to come and see you, and no special thanks are required - only our apologies that we had not come sooner, and that our visit was of such meager duration.

I spent the entire return trip from St. Louis - floor to ceiling, beginning to end - reading a book called His Majesty's Dragon. That shouldn't be a good book, His Majesty's Dragon. It should be a flimsy, invertebrate creature, ill-bred and scrabbling. It is (in truth) a pitch-perfect tale of empire, where His Majesty's Aerial Corps protects England on the backs of dragons. Again: this should not be good. The book I just described could go wrong in so many ways. I would have written this book very badly. Naomi Novik did not, and the world is the better for it.