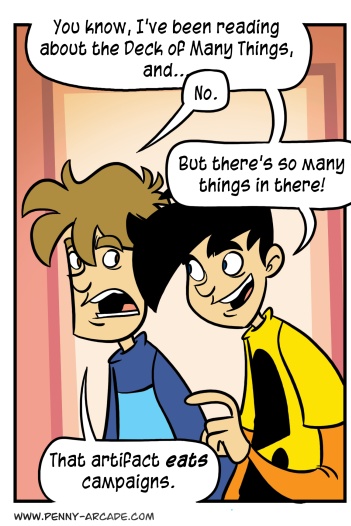 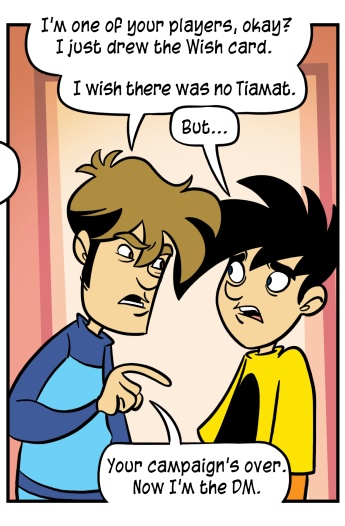 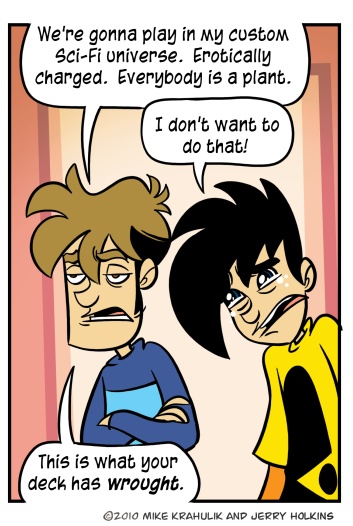 I did my best to warn him, but he's quite certain that The Deck of Many Things has a place in his campaign. On this point, we don't entirely disagree; the only material distinction is that he believes it will "spice things up," and I believe will be its burning, meteor-pocked ruin.

I've used the iPhone 4 over the weekend, and since I was upgrading from the 3G the difference is pretty striking performance-wise. With every update, and the last one in particular, that beautiful, classic device has transformed cycle by cycle into a gasping, wheezing creature, unable to tug its increasingly onerous cart. Now, Fruit Ninja runs like whipped butter. Games that had loading screens in place to occupy the user flash up for a moment, and are gone.

I got two phones, though: the other one is for Brenna. The whole reason I got the phone for her was that the camera takes good pictures and decent video. But it doesn't seem to work particularly well as a phone, so the rest of it is ridiculous. She hasn't mentioned the screen once, for example, even though it be mad crizp; the A4 can fuck itself. Aluminosilicate probably isn't even a real word.

It is always dangerous to make assumptions about people's basic philosophies, and those assumptions tend to (quite conveniently) track with the way you, yourself see the world, so maybe I should limit the scope to myself purely for safety. I tend to think of technology as a force. It's not so much a physical object as it is a manifested capability. Having serviced technology, and having loved it for years beyond that, and now utterly dependent on it for both my livelihood and leisure, my relationship with it has an (ironically) pre-industrial quality. When I actually think about it, of all the ways it intersects with my being, I wouldn't know what else to call it but worship. I'm not trying to be a poet.  I believe that statement to be accurate.

There's a pragmatism there. If you're going to have a god, you want to be able to call on Him; it stands to reason that you might want to make a call on Him.

This is not true for Brenna, and the content immediately above would make her angry. She sees that phone the same way she would see a hat, or a ladle. If you had a ladle and you tried to get soup with the ladle but the soup came out, or fell out, or whatever the culinary equivalent of a lost call is, she would try to break it over her knee before throwing it in the garbage. She was calling the bank to get her password reset, and it kept dropping the call right when the man was saying "your password is," until eventually she began to make a sound like a jaguar. When my phone drops a call, I don't like it, certainly. But I'm always a little surprised it worked at all, that it ever worked - technology failure is like inexplicable drought or some other natural phenomenon. I wonder what I have done to anger the spirit which dwells inside the phone. I look to my own life, and seek to purge the sin.

The Mario Marathon is toiling away for our collective amusement, having progressed far, but let us lead them to their victory. They need your literal coins to continue collecting the figurative ones, which might as well be real coins because they've already raised almost forty-six thousand dollars for Child's Play. Is that enough, do you think?