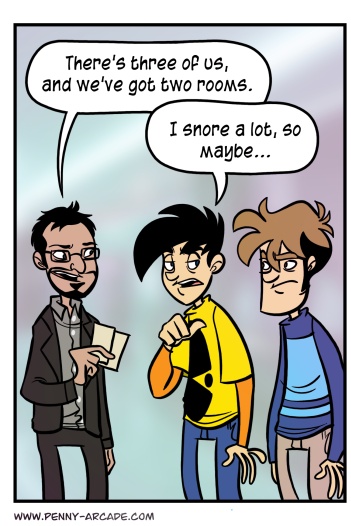 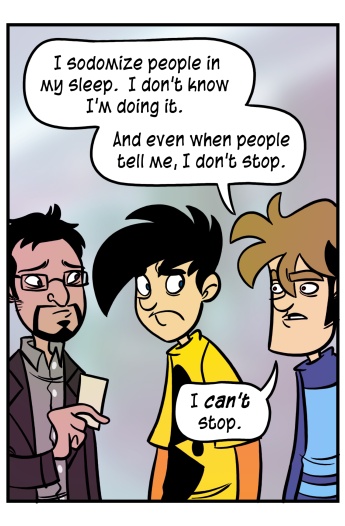 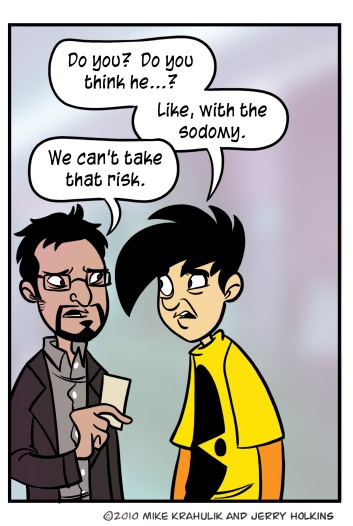 The room scenario described in the strip is brutally mega-real. My response was to haul out the big guns. Actually, it's my policy to leverage the big guns exclusively. I had a few little guns for awhile, and I sent them back. "Won't be needing these," I said.

- Should you be one of those attending the San Diego Comic Con this year (a group which must include a statistically significant portion of the readership) please stop by our boof, which is located conveniently at shanty number "1237" in the strange and temporary society of the Dealer's Room. Our friend Scott Kurtz is situated very near, and so are many, many other fascinatory persons.

- I talked with someone from Playdead at PAX East a few months back - the team behind the ridiculously beautiful XBLA title Limbo. He was so open about the process of developing Limbo and their aspirations for it that the game has set up a tidy room in my thoughts. I can remember looking at that demo reel on YouTube years ago, wondering what (if anything) would ever become of it. I had half a mind to bring a 360 down to the convention with me, purely for Limbo purposes. A tickling frond of my rational mind knows the game will still be here when I get back, that it will not evaporate. It is trying to convince the other lobes, and it is losing.

before i even met you