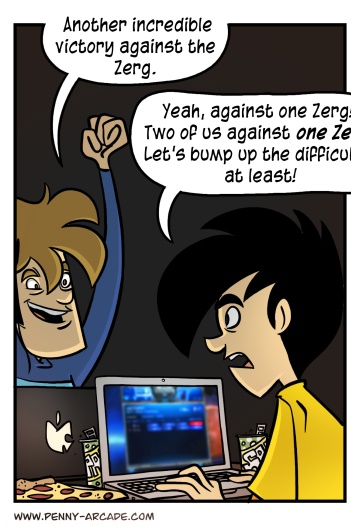 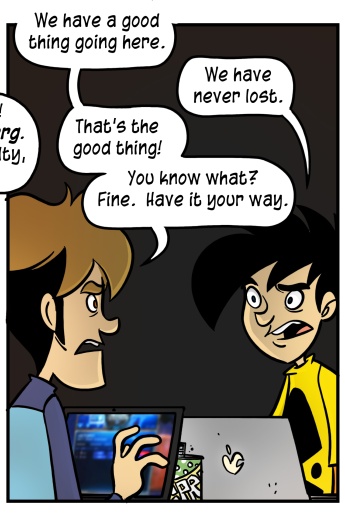 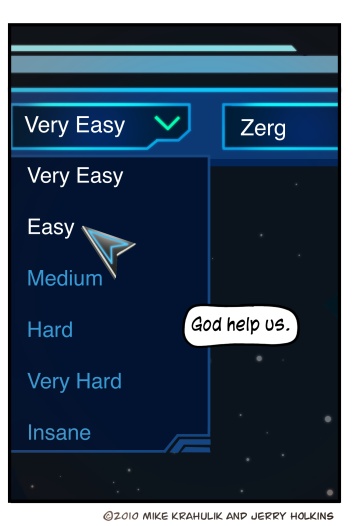 Did you know that there was a time when our website played host to comics of a "humorous" nature, japes of a merry sort, which dealt with popular culture in general and electronic games in particular? Return with me, friends, to those ancient times. The truth is even more savage, and brutal, and savage: we're considering a bump to a single medium opponent. I have written a will.

I know I'll play through the rest of the campaign at some point, but whenever I sit down to the PC it's just not what I want to do. I mean, I bought it; it's not going anywhere. There is a little icon on my desktop that titters from time to time, "come with us, dance about our faerie ring," but I always feel like I know how things are going to play out.

I'm not offering it as a substitute, but I do want to see what gets done with Company of Heroes Online. I think it's the wargamer in me; wargames are about units, certainly, but they're about how units succeed in a given environment. You get hooked on an idea like creating a squad out of a converted urban garrison or using the crater gouged by an artillery strike as impromptu cover. When I say you, obviously I mean "one." It has lots of MMO bric-a-brac outside an individual match, and matches themselves are informed by persistent Hero Squads (and other things; check it out) but within the confines of the round the traditions of CoH take root. I tend to get more excited the less like a traditional RTS a game happens to be, and I've never been shy about that, but I've announced it here so that we are on the same page. My favorite of the "old school" games of this type were Red Alert and Myth, the first because it has serious balls regarding what a unit could mean for gameplay and the second because it told the genre, as a whole, to fuck off. One of the first games we ever advertised on the site was Shattered Galaxy, an "MMORTS" from Maple Story founder Nexon, which had groups of up to twenty players controlling their own limited units. World in Conflict - another game that doesn't have much use for RTS conventions - has a lot to tell us about what a persistent RTS might look like.

Kane & Lynch 2 defines precisely the kind of narrative arc I like, and I'm not referring to the travails of two ill-matched anti-heroes, although who doesn't have a soft spot for that. I'm talking about the arc outside of the game: released to something less than acclaim and then bruised by conspiracy, it's not typically the kind of thing that I'd expect to surface again. But here it is, and it's hongry, with an incredibly now aesthetic, a protagonist shift, and a broader multiplayer suite. I want to believe in a world where redemption is possible.

I grabbed the multiplayer demo for my PC, but had a hard time slipping into character: the way they present running shatters their otherwise careful visual construct, and in general I found the mouse a slippery way to do what they wanted me to do. I also saw something incredibly strange, and I wonder if anyone else had a similar experience: I'm not sure their presentation, which is really sharp in videos, actually works at the resolution computers dish up. It's whole thing is about raw, surveillance type footage, but when you put the pixel density of a modern machine up against that it looks completely false. When the time comes to try the game for real, I'm betting these concerns will be ameliorated somewhat by the console versions.

I wanted to mention again that our store is closing down for a bit - Friday night at 11:59 is the last time you'll be able to make orders from it until it returns in fire, like a phoenix. In the meantime, please enjoy 10% off any of our stuff by entering the code mov1ng at checkout. Also! If you have moved since you purchased your PAX badge, and you want your badge shipped to your current address and not to the Goddamned freeloaders at your old place, Friday is also the last day to tell us where you've gone. The process is simple: just mail us at pax_questions@paxsite.com, and let us know where you decided to go, and also what shadowy force (real or imagined) inspired your hasty departure.