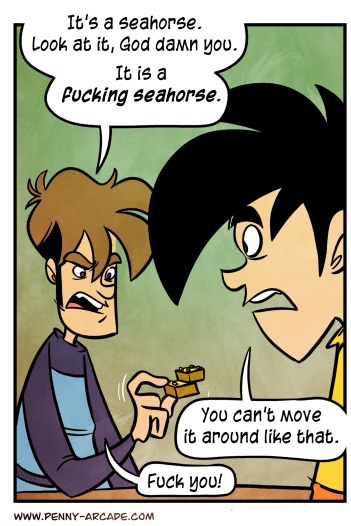 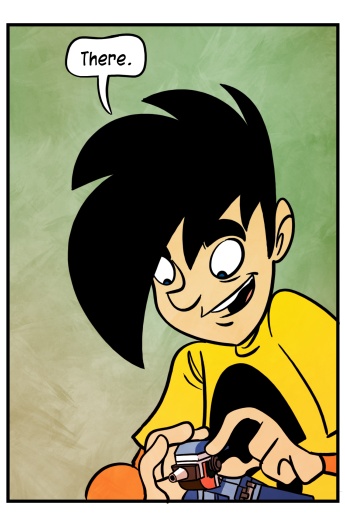 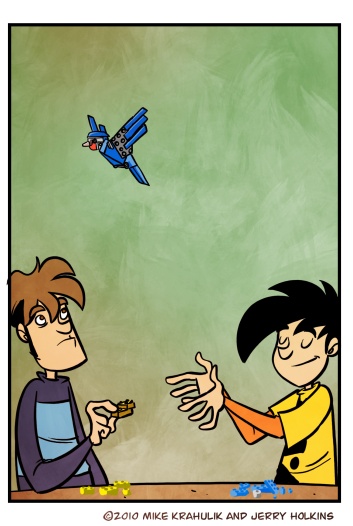 Nobody likes artists, and who can blame them? When they aren't challenging your preconceptions or whatever, or renouncing the boundary between being and nonbeing, they're beating you at games with their nigh mystical bullshit.

It's been our intention to capture MNC in a strip, but this has to be something like food writing: trying to communicate what is noteworthy about it has a profoundly appetizing effect. We had the same fantasy about Lara Croft and the Guardian of Light, and a similar thing occurred. These are simply games which are Good, their Gs firmly capitalized. Their virtue hangs directly from the bough; you have but to close your hand to possess it. They need no advocate, and they both have robust demos, which more or less puts me out of a job.

The fifteen dollar/1200 magic seed price point these games have is generally thought of as a mercenary act, and maybe it has that component, but it's also what attracts some of this stuff. When Sony delivered Warhawk digitally, I thought that we'd just be downloading everything from then on, and then when they did it again with Socom I thought for sure the future was here, and then when they released a handheld machine with no physical media I thought maybe, but no. It seems bizarre to me, truly bizarre, but fear of unnamed and undefined reprisals by retailers have publishers and platform holders both staving off the inevitable. I referred to it as the future above, and even that's not correct. Digital Downloads are literally the present, and the fact that we don't have access to them on dedicated game platforms should reveal to you the secret mechanisms of industry power.

As much as anything else, fifteen bucks is about carving a download specific region out of retail. In the same way that the new sixty dollar price point brought all the boys to the yard, "the yard" being next-gen systems, publishers want to create and ship products electronically but the margins can still be brutal in the southern end of that space. I'm in a position to know.

Succulent new Penny Arcade Television today - 2 Player Productions is back on the docket with their chiptune documentary Reformat The Planet. Only the first episode is up at the moment, but all seven parts will be available today.

a movie i'm not in