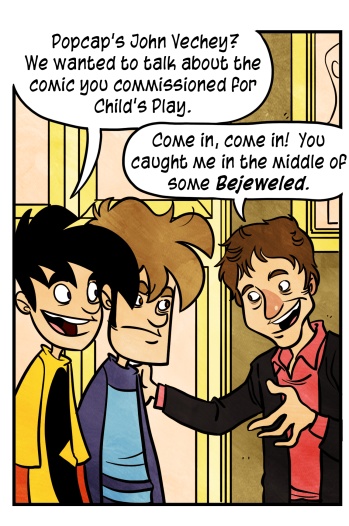 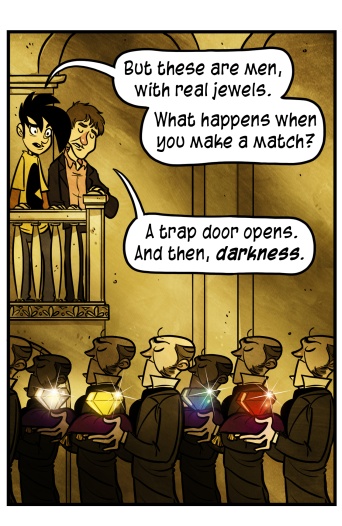 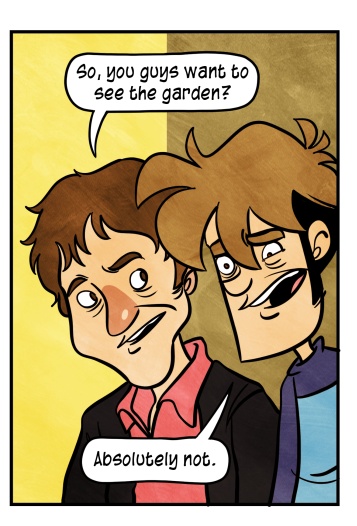 Every year at the Child's Play Dinner (sold out, or I'd make that text a link) we auction an appearance in the strip that sometimes culminates in "Charity Brawls," so intense is the desire to be rendered in Gabriel's hand. Last year, it was Popcap's John Vechey. I'll let you know who gets it this time, so that you may be tantalized preemptively.

Lots of tiny ideas today, maybe too many. Let the purge begin:

- When I mentioned that I had gotten into painting miniatures after years of avoiding it for some kind of stupid made-up reason, I didn't include a picture. These are my Deliverers, if you wanted to know what the work of absolute novice whose hands tremble like fall leaves would look like.  You can click it, if you would like to see them better (from some reason).

My conception of this game is so backwards now, my enjoyment of this portion of it so complete, that I sometimes forget that there's a game associated with all this idolatry. I think I've already had as much fun as I can possibly stand.

- Let's try to get out of the Move/Kinect sales comparisons business before it gets authentically underway, shall we? There is no sensible way to put this information in context. You cannot compare this information in any useful way. You define sales of one by how many controllers you sell. The other device has no fucking controllers. So stop it.

- Having novice Assassins do your dirty work in AC: Brotherhood is easily the most satisfying activity ever bound to the Left Bumper (or L1, for our friends on the Playstation). Ezio holds his fist up in-game, and an Assassino jumps down onto your target from a nearby roof accompanied by the call of an eagle. The only material improvement I can think of is to sense the fist-raising movement with the Kinect, and to have it let you kill real people.

- I read Craigslist personals to feed on their thinly-veiled anguish like a psychic vampire.

- They had me send in a ballot for the Spike Video Game Awards this year, and it was pretty easy, because I just entered Monday Night Combat for every category, even categories like "Best Performance By A Human Female" (Monday Night Combat) and "Studio Of The Year" (Monday Night Combat). There's free DLC for the game today, a new map for each mode, nestled in a ton of fixes and map tuning. It's a pimpworthy maneuver, and I endorse it with the entirety of my being.

the lace and black curtains