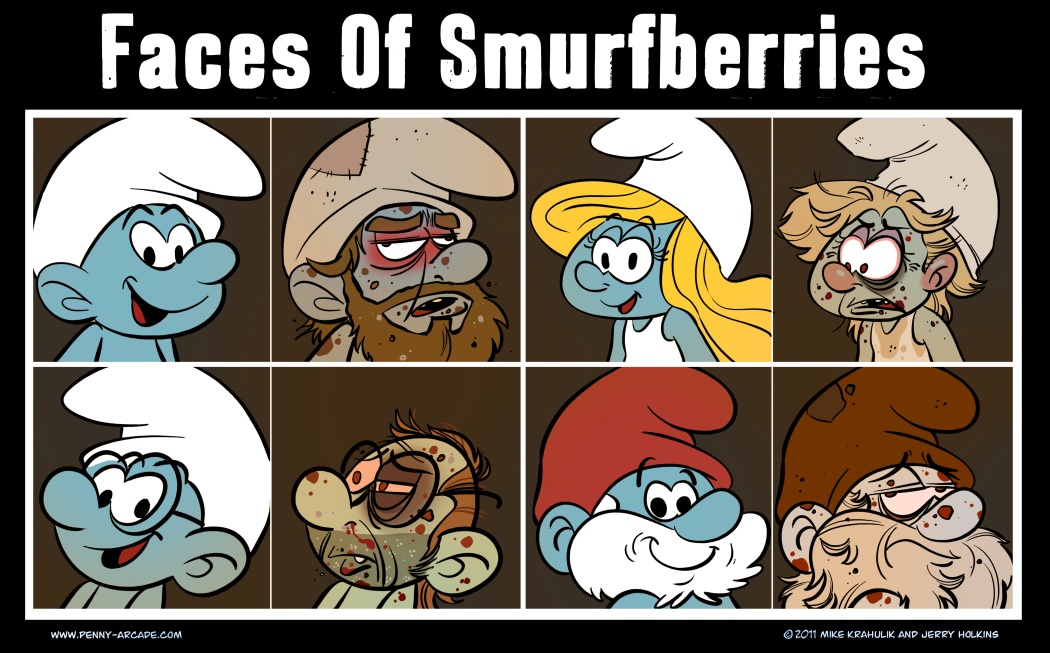 Gabriel was trying to tell me about his Smurf Town, and how many Smurfs were there, or something. I was given to understand that there were "hella" Smurfs, almost perpetually "up in." I also learned that, like most freemium lures which writhe and flash on the hook, it has a potentially brutal microtransactional backend whose thorny roots grow into its very heart. Apparently, these "Smurfberries" make your Smurfs work their asses off, stay up real late, war with androgynous Shadow Men, and avoid mirrors.

Games of this kind really know how to get their barbs in; my male heir has suffered under their yoke, but I have endeavored to create a buffer.  His access to the App Store is gated off by a truly Byzantine, deeply manipulative, and wholly imaginary economy based on "stars" which can be redeemed for things he wants at rates which are constantly in flux. Sometimes he owes us stars. I'm trying to simulate the crushing uncertainties of a capricious universe, and he's haunted by it.  It's working.

Ever since I wrote my last post, the one where I expressed a desire to play Killzone 3, I have been unable to actually do so. During the beta I mentioned (after basting the title with praise) that Error 20002 had begun to uncoil on occasion, and hiss, and bob rhythmically. I talked about how in another century Anarchy Online had jacked up my boot sector and so it's like betas, am I rite? with the idea that no retail version of the title would include experiences of this kind.

This is true, in a sense; they have changed the error numbers.

Killzone 2 had a problem where if a game session ended prematurely, any experience points you earned during the round evaporated. Eventually they figured out that in a game whose progression structure is already cruel (with a minor in sadism) and where that structure issues the rewards that distinguish the game from its contemporaries, leaving that progression up to Nidhoggr or the vagaries of the Internet verged on the diabolical. Every sequel must expand upon its predecessor, and Killzone 3 does not disappoint: Error 9, actually Error 9-, lets me know before every game that it won't be tracking my experience points, and am I okay with that? For the record: no. But this is better than the other errors I get, like this winner:

Or this Captain of Fucking Industry:

Sometimes I'll come back from one of these and the box is hardlocked and I'll need to restart, but I don't know why I should, because when I turn it back on these errors haven't gone anywhere. For a First Party excursion, this stuff is pretty shocking.

I spent the afternoon trying to figure this out. I'm simply not used to having problems of this kind on that system. The Playstation suggests that I have NAT Type 2, which sounds like a blood disease, but it turns out that NAT Type 2 is a good thing, even though an incredibly abstruse wisp of network doomsaying flits around at the base of the screen, warning that I may not be able to receive "Fragmented Packets." Maybe I didn't want those packets anyway! Who are they to say.

Talking with Erik, who maintains the very equipment that served you this page, we decided to plug the machine directly into the router, exposed to the rabidities of the raw web, with its own valid IP. There aren't any more of those: it was like seating the thing on a golden throne. NAT Type 1, the most rare and prized sort of NAT. You know how this ends, I'm sure. It ends the same as all the other attempts: in despair.

It being Friday, we have new Penny Arcade Television for you. This time, it's Child's Play 2010. I would have a handkerchief at the ready.

this world full of you