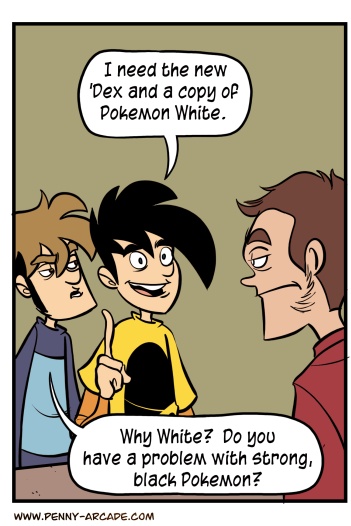 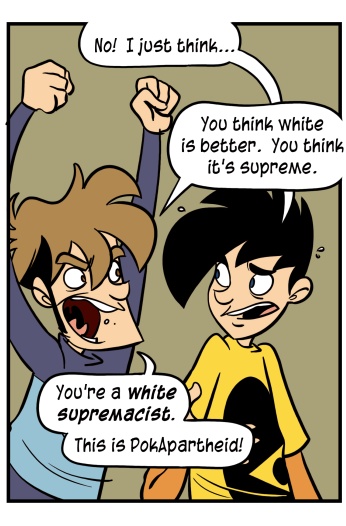 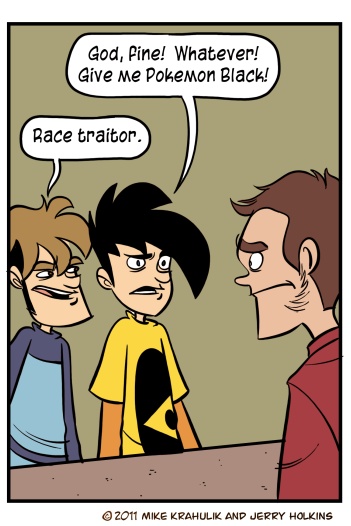 Your choice of Pokemon games mostly comes down to whether or not you want Reshiram or Zekrom. Clearly, Zekrom is the right choice. Even more than usual, though, the whole experience actually comes from having access to someone playing the opposite cart.

Scott came by when we were writing, and was curious about the whole Pokemon thing, and the attendant Pokemania. In his mind, he assumed that he would be at a tremendous disadvantage trying to figure this shit out now. What had he missed? We told him, as I tell you now, that there's no reason to avoid Pokemon merely because you haven't played it before.  It's a curiosity you'll find well rewarded, and it's not like you're missing out on some ur-narrative that floods the setting with hidden profundities. We're fairly new converts, and Gabriel and I like it for different reasons. For my taste, I find the endgame of Pokemon brilliant beyond words but the journey to that inestimable plain somewhat... gritty. And I don't mean "tough and uncompromising," though it is sometimes that. I mean that it is full of tiny granules, like when you bite down on an otherwise moist clam.

It's got a mean-ass grind. As in, mean. It's got a grind that is literally from another era of thinking about videogames.

The game I like - Pokemon Prime - is when someone has a good roster and is ready to go online. In such a scenario, I endeavor to make myself invaluable: I'm quick with the 'Dex, and I've got dire portents and clutch insights chambered to illuminate every match.

You might have heard that "Mojang and Penny Arcade" are working together, I've even seen some sources put our name first, which is a truly gruesome error. What has happened is that Mojang would rather develop a videogame than write one, and I would rather write one than develop, and we two fell together in some cosmic romance. I'm a hired gun, though - nothing more. I'm on "fluff," essentially. I'm a fluffer.

I asked Brian why Erika's new Code 2.0 shirt was only fifteen dollars, instead of the normal twenty, or even the million dollars it deserves to be, and he said that it was because of St. Patrick's day. There's a bunch of shirts at that price, he said, because any shirt or hoodie that features green as a part of its design has received a discount. He said that it was all made very clear in the newsletter.

It's gotten to the point - really, it's really gotten there - where I have to subscribe to my own company's Goddamned newsletter in order to know what the fuck is going on. My brain is warbling, it's warbling right now, and it is trying desperately to get out.

and then we'll let him go