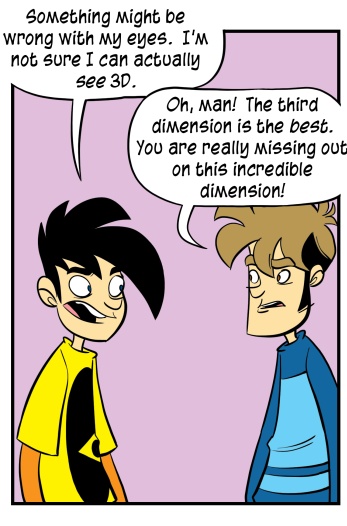 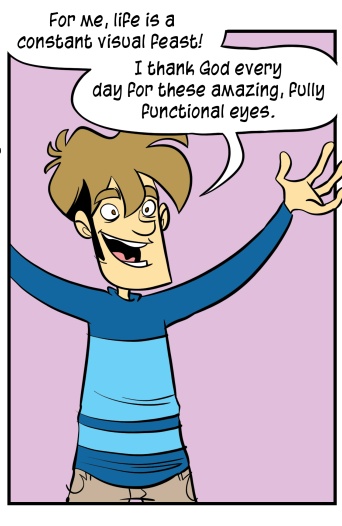 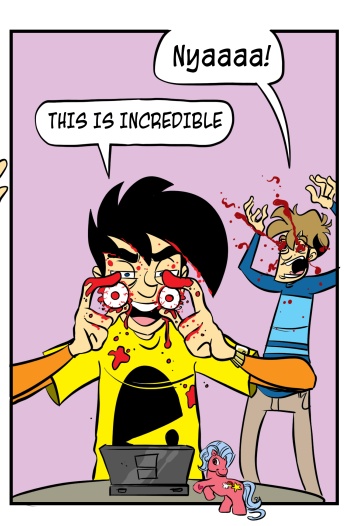 I have been lying in bed feeling desolated in an essential way and powerless, as my ill-used larynx throbbed with the wages of a weekend spent in fervent communication, with a catalogue of odd metallic tastes making themselves known to me in a kind of perpetual rotation. I assume that is my esophagus collapsing, which is too bad, because I've found having an esophagus tremendously useful.

Here is the strip we made during the aptly named Make A Strip Panel, and the condition described in panel one is sadly true. I am not always convinced by the use of 3D technology in today's games, maybe Naughty Dog can change my mind, but it's become increasingly clear that Gabriel does not see this mysterious dimension in any authentic way, it just seems kind of blurry to him, which is not exactly in line with its purpose. He's just wondered quietly, every time, why people seem so Goddamned drawn in to the digiverse.

It reminds me of a story.

My father-in-law is incredibly allergic to fresh peaches, any stone fruit really, but peaches were especially common and were always there to eat. He would be with people who were eating them, and he assumed that everyone else felt the same terrible constriction of the throat, the same anxiety and discomfort.  They all appeared to be smiling, and biting in he would smile also, wondering in secret what the all-fired attraction to these toxic bulbs was even about.

The big question last year was whether or not a show could sustain a valid Exhibition Hall at the end of the first quarter, a notion which has been put thoroughly to rest by this year's wide-ranging and evocative bazaar. There was a rough and ready cast of heavy hitters, but at every juncture they were flanked by undeniable indie talent that was relentless in its vigor.

Warp, Fez, Bastion, and Orcs Must Die more or less represent a future where good games are not locked into specific portions of the year like seasonal "crops." Also, Smuggle Truck, Snapshot, and Blinding Silence lit up the Boston Indie Showcase. I spent several hours in there, any time I could get, and I'm not convinced that I saw it all.

That was only one room, in a show that nearly filled up a building which loomed and stretched like a starship. I'll unpack these memories as the week continues, but as a statement, I feel comfortable with this: It was the best PAX yet, until the next PAX. For many years I was under the impression that this was something we were doing, an event we were putting together, but now I've come to believe that PAX is simply something that happens, a function of the material universe, like Spring.

the future's coming much too slow