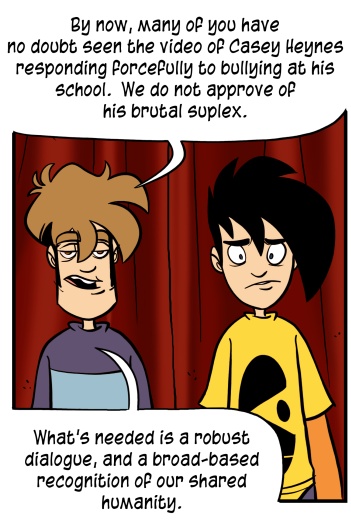 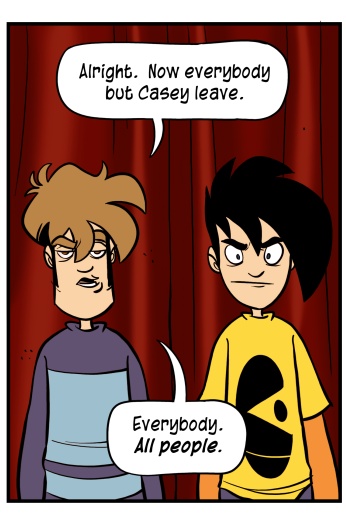 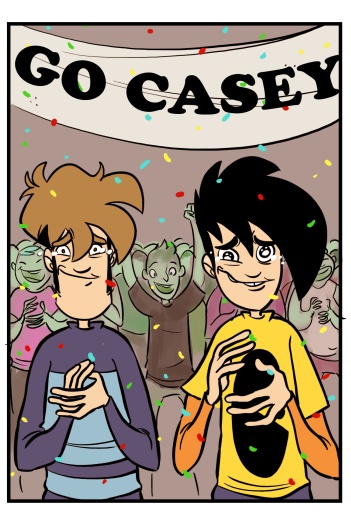 It won't be terribly hard for you to find the video, if you haven't already seen it; the strip contains all the pertinent details.

I wish his experience were less common.  Certainly, I allowed myself to be beaten up on more than one occasion. Fighting more than one person at a time isn't good math. Certainly I had more than one opportunity to respond as this young man did, though without such a prodigious display of upper body strength. Ultimately I decided that if I was going to stay as weird as I obviously was, I was going to need help to do so; ultimately, the same penchant for demagoguery which I have leveraged to such powerful effect here on the site allowed me to put together a crew of others who lacked enthusiasm for their own beatings. I called this coalition the A-Team.

Because it was the eighties.

It ended poorly. Our dark mirror in a higher grade eventually surrounded me on the soccer field. They asked me if I was Hannibal. I said no, even though I was. The shame of it is still lodged somewhere in my throat.

I don't have any good advice for people in Casey's situation, other than to say that we are occasionally dealt into games we had no intention of playing.

I do, however, have advice for those who feel compelled for whatever reason to pick on That Kid. I needn't name them here. The trouble with picking on That Kid is that eventually every cruelty, every glancing impact, and every foot-pound of stored kinetic force will erupt - black liquor at cask strength. You will cease to be the tormentor of the moment and will instead become the red and leaping Devil, a vessel for human evil as a generality, an amalgamation. That is to say, not human.  You will become an object.  An icon.

This is an outcome you want to avoid.