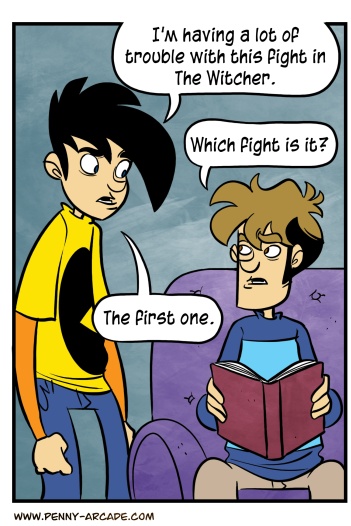 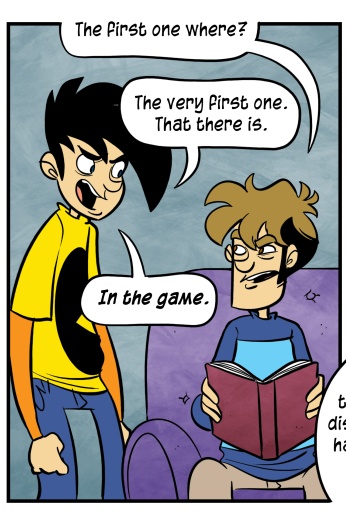 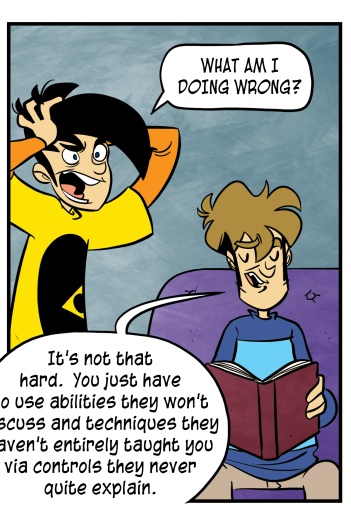 I installed The Witcher 2 on the PC we have in the office here so that Gabriel could see with his own eyes some of the things I’ve been telling him about. While I was home this morning teaching my daughter which berries are to be avoided, he was here playing through the game’s nominal “tutorial,” a sequence of retrospective vignettes that can be played in any order. When I got in, he told me that he had died twelve times at the same spot and then quit. I knew the spot he was taking about; I’d died there myself.

He didn’t believe me when I said “forty-seven,” but I started counting it. It’s partly my fault. I wanted to see if something was possible, and it wasn’t! It really, really wasn’t.

I’m not sure what they were thinking with this stuff, I honestly don’t; this dogged refusal to help the player. If I had to guess, it is this way because they didn’t want to do some boring, typical tutorial sequence that insults the player and makes their titular warmaster out to be some concussed dipshit, taking part in some remedial course for monster slayers. That’s certainly something I can understand. What’s happened in the absence of a true “booster phase,” though, is that people who want to play the game but lack psychic ability are forcibly driven out.

It has tooltips that pop up from time to time, but if you’re under active assault by a dragon maybe you aren’t looking at that. This game doesn’t really play like others, your skills either from action titles or the role-playing genre won’t really cross apply. A Witcher is tough, but he’s not optimal unless he takes time to prepare for a fight, which involves the brewing, consumption, or application of various things inside or outside the body. This is one of the things that make up the odd cadence of this world. So much is left to chance.

PC Games can be cantankerous, idiosyncratic, occasionally unrelenting, and unwilling to make concessions. I happen to like that kind of thing; that’s more or less my own philosophy. We are just... unreconstructed, is the word. If they’re serious about bringing this to consoles, the first hour of the game needs to go up on the lift. Those nines and tens it’s pulling now won’t survive contact with that audience.

We met Lane Daughtry a few years ago when he was working over at SOE Seattle, doing battle with him and others in one of our turns as itinerant ping-pong wizards. After coursing through the industry like a vile pathogen, sowing dischord, he eventually decided that he wanted to have a go at actually shipping a game every now and then just to see what it might be like. Well, he just did that; it’s called Current, and it’s sort of like Puzzle Bobble if Puzzle Bobble were taking place inside a haunted calculator. It has great music, it’s free to download, and if you want more of it you can do that right in the app.

future, past and perfect tenses