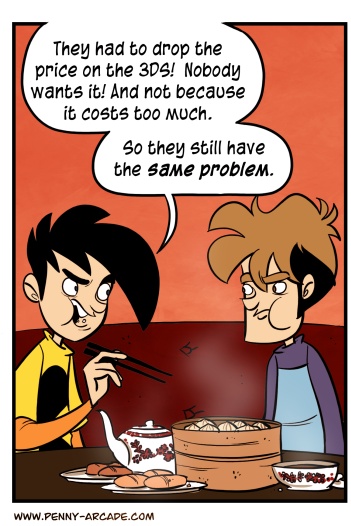 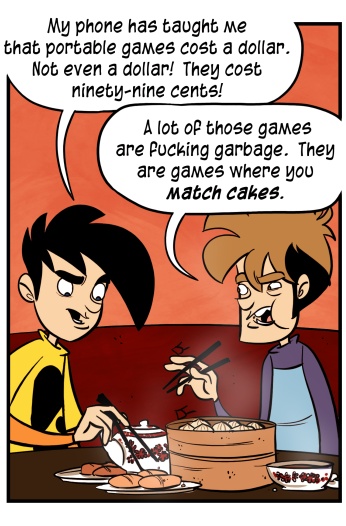 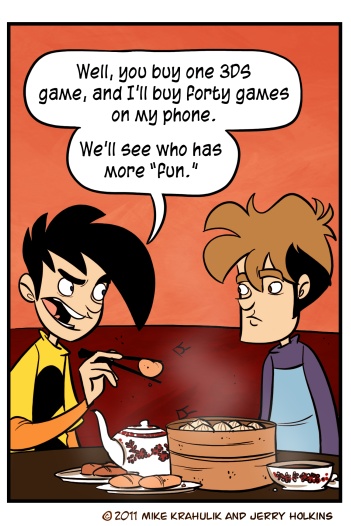 I’ve made no secret of my struggles to integrate the Nintendo 3DS into the contours of an entire life. The machine is literally my son’s Pokedex - that’s all it gets used for. It’s very good at being that; I don’t want to seem like that’s nothing. But, considering the lineage, it’s starting to look like the blanged-out wastrel heir of a once great house.

We could say that they cut the price of the device, or that they are cutting it, when what they have done in actual fact is to butcher it, hacking madly until the blade meets the board. The cut is comically large, verging on the bulbous. It doesn’t look strategic; it looks like they’re throwing treasure overboard in an attempt to keep the ship above water.  Maybe they've got a "media story" that makes all of this look like a real plan, but who knows.  Their online store is a nightmare: it’s like the nightmare an actual online store would have, it’s like if an online store were looking into a mirror while its fucking face melted away and the only thing that could staunch this horror was the eventual liquefaction of its optic nerve.

I honestly don’t know what it means for the Vita - it depends largely on why you think the 3DS is having trouble. Certainly, games on the Vita look more expensive than their 3DS counterparts, and we can be confident that there’ll be a premium attached. The reality for me is that even as a “gamer,” an enthusiast, a true adherent, my phone is enough even on a trip. Period. The premium cache associated with Portability capital-P has been obliterated, being portable is insufficient as a motivator when I have multipurpose computational sliver perpetually en pocké.

Diablo III information is starting to hit, and while I think it will be fun to click on things until they die, I’m immune to coverage of this process. You must always be connected now, even in single player - I remember hearing that having to always be connected was bad, so I sure hope that everyone remembers to be angry. I have to say, though, that I love the idea that the reason you need to stay connected is to keep people from cheating, while at the same time creating an infrastructure to purchase equipment straight out with cold, hard cash. Blizzard has no plans to sell items themselves - oh no! - but the sellers are anonymized, so... hm. Apparently you’re supposed to report things like these with a straight face.

all the birds of the air did sing