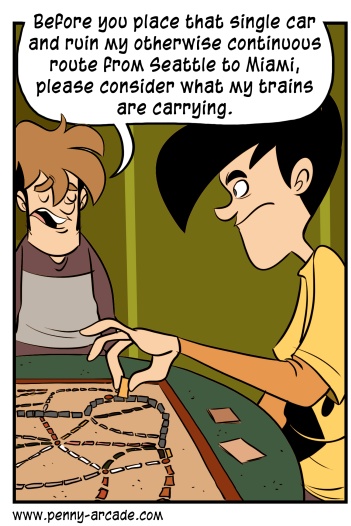 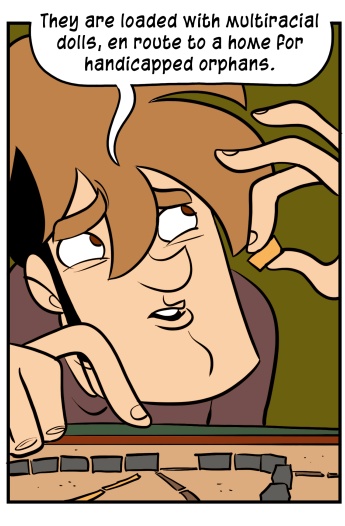 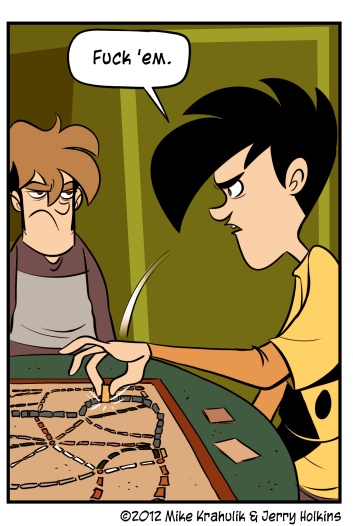 Even if it is your job to like games, it is entirely possible to miss them because as a result of time's specific and intractable properties. For example, and there's a nontrivial shame factor involved in this announcement, I just started playing Dungeon Raid. It's almost a year old. It looks like Match 3, but it's not exactly; it's like a four dimensional slot machine crossed with the Lament Configuration. Gabriel discovered it in the grip of a terrible fever; I can only imagine how its themes of subterranean terror must be enhanced.

We've also been playing Ticket To Ride, another ancient remnant, though at least we are indulging in its digital iteration. I own the actual game, specifically the Marklin edition, but the benefits of owning the digital version are pretty vast. These benefits are compounded when a friend of yours also owns it, and you are hurtling through the frigid air in the middle of the night on your way home. I would never rob you of an opportunity to learn the game for yourself, but the application of what are sometimes called dick trains to ambitious routes by interlopers, villains, and scalawags is a practice you will become deeply familiar with.

Tribes Ascend is a thing you can download now, and play, as opposed to a thing you can hear about from other people. And its sudden reality has given me a lot to think about.

Tribes was, more than anything else, certainly more than its contemporaries, a huge box full of useful parts. You could affix these parts to yourself and take ownership over a wide range of tactical situations; you always had the whole box. This, coupled with the fact that players could issue each other orders, meant that your role both individually and in a hierarchy were definable in incredibly broad ways. This fluidity of definition extended to the game itself, where fairly ambitious mods could be download instantaneously and you joined the server. What this means is that even if Hi-Rez made a Tribes, and did so at a high degree of execution, it's quite possible that they haven't yet made the Tribes you knew.

Here in the office, Levin mostly played Renegades; eventually we stopped playing base Tribes 2 and moved entirely to Team Aerial Combat, a mod which killed you if you touched the ground, like a far-future version of the Hot Lava game children play. I was also fond of Team Rabbit, which was eventually rolled into the game proper. None of those are in there. The Toolbox is gone; in its place are a series of branching equipment packages that form the spine of the game's business model. I was surprised at how much Tribes actually remained given this shift; I suspect that the economy will see some changes before too long as the developer and the community find middle ground. I urge you to try it though, even if they have not yet excavated your perfect memory. There is still a bright, clean line running through Tribes that no-one has managed to duplicate.