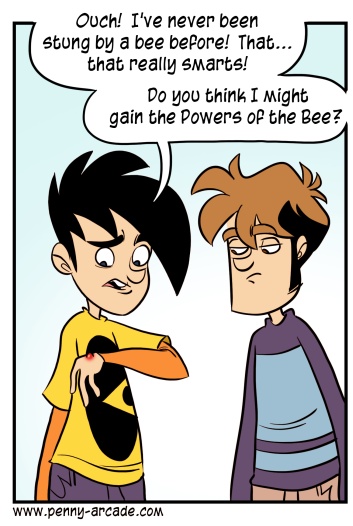 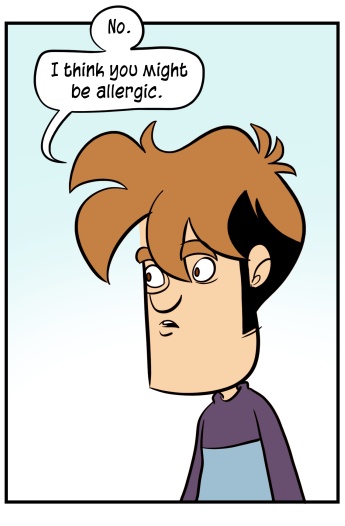 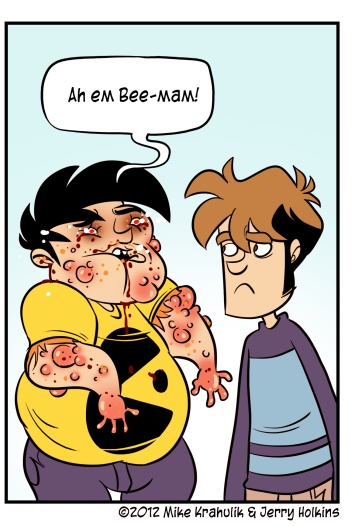 I was fifteen or so before I'd ever been stung by a bee, so that by the time a bee finally got around to doing it I think I'd sort of forgotten that was something they did. And then you resent it, this fuzzy little flying needle, even though all she's actually doing is just executing her little subroutine tryna get dat pollen. Gabriel managed to make it all the way to thirty-four without envenomation, something he no doubt considers a kind of "score" to be lorded over me next time we must invent a hierarchy.

He did survive it, though. There was mild swelling.

I have to say that, apropos of Monday's comic, I thought Microsoft had a very good showing of their retooled Surface concept. I've stopped travelling with a laptop at all, getting there with an iPad 3 and a bluetooth keyboard for whatever needs accomplishing, because I don't require much in the way of specialized tools. But the philosophical aversion of the iPad to external pointing devices makes doing text-heavy work a huge hassle. Kiko did tons of fine visual edits to the card art for Paint The Line on his, but the flitting, screen holistic stuff I need to do ain't working. This seems like something they've thought about with this tablet, and when I say "this" I mean "me." We all know, by now, what brings boys to the yard; even if a boy should leave the yard, like Gabriel, eventually they will come back because the other yard okay I'm dropping it. But this is neat and decidedly not dumb. There is no auxiliary salad tank.

The reason - and I've said this before - the reason Microsoft is the recipient of so many enthusiastic, precision strikes to the balls around here is that everything they do should be as comprehensive philosophically as this Surface Tablet Thing. To whom much is given, right? This is something I could make room for in my life. Nice work.

If I could talk about Quantum Conundrum, this post would be much, much longer. Indeed, it would probably be too long, because it would consist primarily of vowel-rich ululations emanating from an accordion of inner joy.

the rain was unstoppable