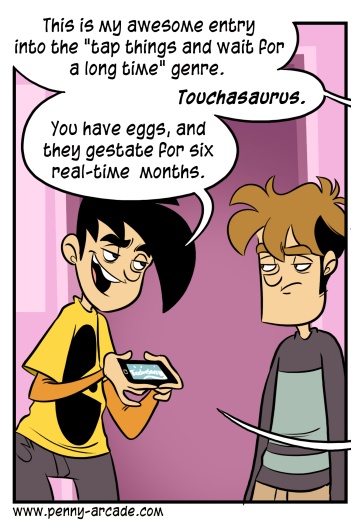 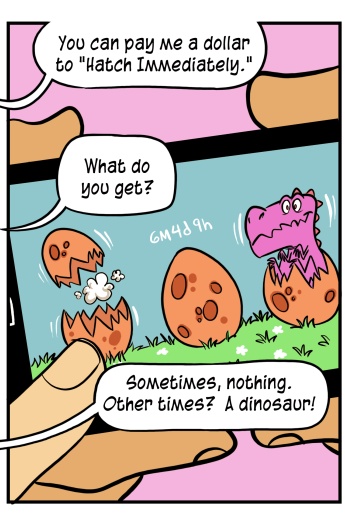 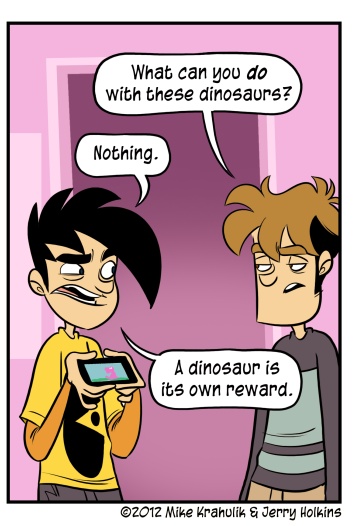 So now that he's back in the Mobile portion of the fold he's having a number of "freemium" experiences that he enjoys to varying degrees, even though he knows that he is only pushing a metaphorical button until a biologically reinforced reward falls out. Games that you can only play for a little while until all of your weebles have been committed, and you must wait for them to return. Kara's strategy is to play so many of them that she is never without a weeble, or at any rate a weeble equivalent, to invest in her digtal airport/sushi bar/dwarf village/kumite/skeevy rub n' tug.

In any case, having seen its corrupting power, Gabriel decided that the time had come to plant a flag in the genre. That is all a joke setup, obviously, but we're already getting pitches to make the game detailed in the strip, which is sorta like... dudes. I'm not sure you understand this one.

The difference between Gabriel and myself, one of many, is that I actually did make a game, one that you can buy on Steam OR on Xbox where it just came out about ten hours ago. I even (ahem) "binged" it on there, I literally said "Xbox, Bing Precipice," because I felt confident that no-one had ever said that before or would, ever again, after that moment. I like to put my stamp on that kind of stuff.

I don't invest a lot of time in Facebook or Google+; I actually baleeted the latter account altogether. There's just too much opportunity with those things to promote products and services inadvertently, filling up people's pages and annoying them, something I'm perfectly capable of doing right here. But I may have to reconstitute the Google+, if only to make use of Tabletop Forge, a hot suite of custom tools built around its Hangout core. Yes, it's a Kickstarter, but the end "product" is free. This is the kind of stuff that turns my fucking crank right here. One of the stretch goals reached early on by the now ancient Mobile Frame Zero Kickstarter was its attribution under a noncommercial Creative Commons license, which means that it is yours also, even if you've never heard of it until now. It's a very different way of thinking about cultural manufacture that I honestly can't shake. 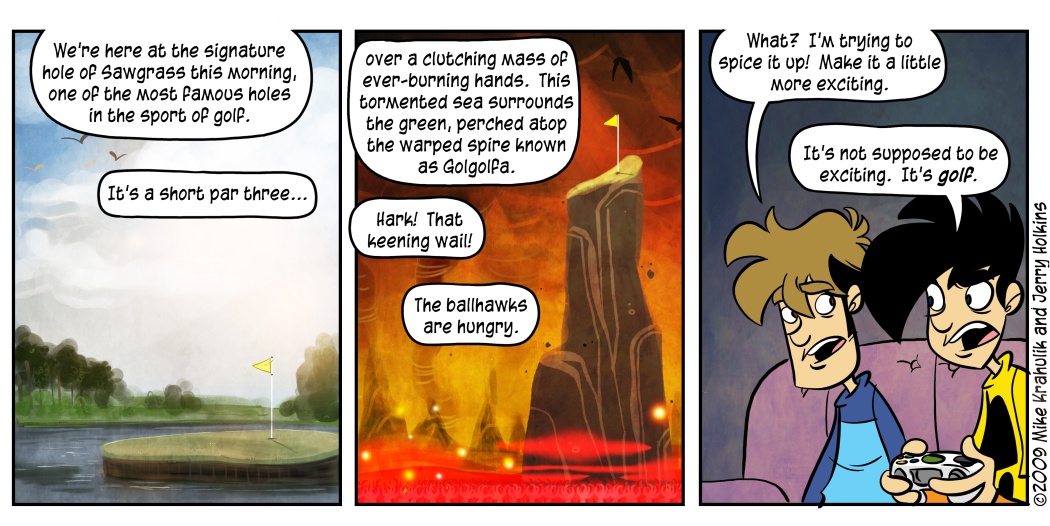