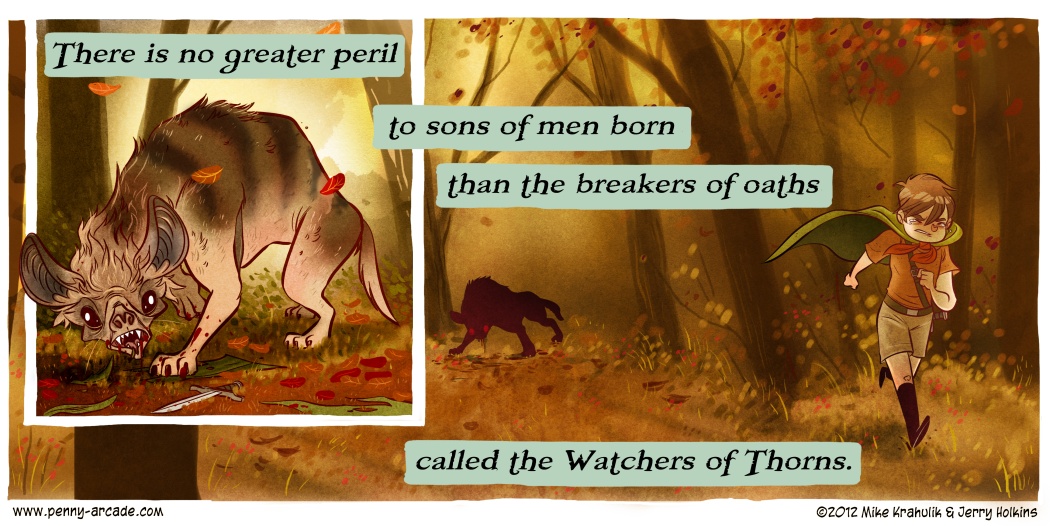 This is what we're thinking about all the time, the wayward (?) inheritors of the Lookouts' creed, so when we needed to get a few strips done ahead of time it was the first thing I thought of. It's three parts total, running until Monday.

The second Lookouts comic is out today, in digital format as well as in your human stores, and its purpose - aside from being fun - was to give us a place to think about the world they live in. It has done exactly this: I know so much about this place now that it is constantly shooting out of my head and occasionally needs wiping up. I now know Goddamn near everything about the Daughters of the Eyrewood, and I have every reason to believe you will like it. That's in addition to a hard boil on Thornwatch that I've now turned the heat down on. Most of that work is for Gabriel's project, so you'll learn about it around your own table most likely. Some of the ideas are in the next couple comics, though, to give you a sense of where they fit in the overall scheme.

I can tell you that it's very strange to have something you made up at Arby's rapidly unfold into a strange triptych larger than your skull. Eventually, they're going to need books: Lookouts, the Daughters, and the Thornwatch all. It's not an "If" proposition. Is that going to be my job, I wonder? Is that the next horrifying, way-out-of-my-comfort-zone task that'll fall into my hands because I made a jpeg with my roommate, like, fifteen years ago?

I can see a time approaching when I don't do anything, all day, but invent names for imaginary medicinal plants. I like to think of this time, and would hasten it.

we picked the right horse