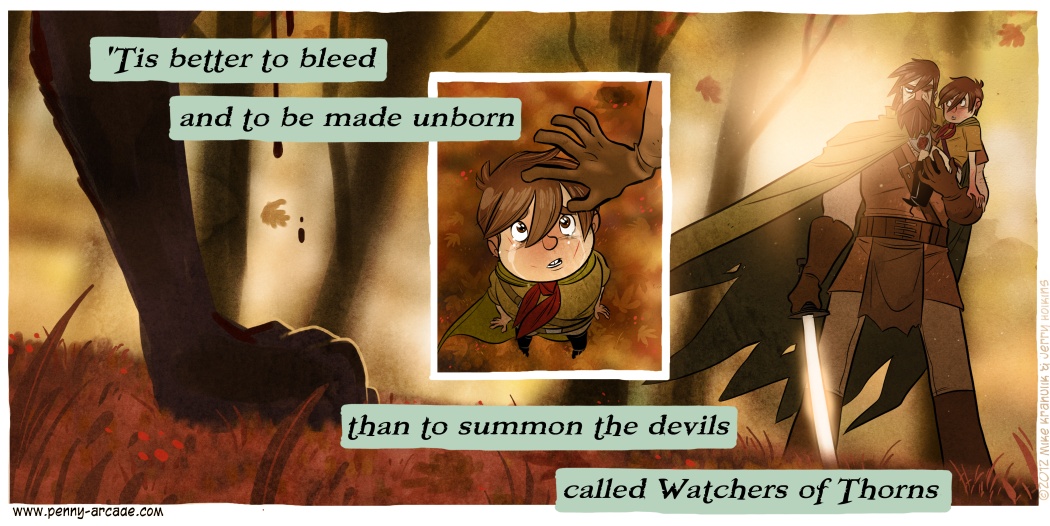 So that's the basic idea of Thornwatch: weird bargains made under duress in the thick of a hostile wood. A "campaign" in Thornwatch is designed to be like a season of a show: you've got individual missions (b plots) all tied into an overarching story (a plot) that isn't entirely clear at first. They aren't mean to run long, they're mean to deliver discrete arcs. CSI: Eyrewood.

As we have made abundantly clear in word and deed, we tend to make things as they're needed. We only work ahead when we think that the alternative - that is to say, our very nature - will cause you grief, like if we have to go somewhere and it would be better to have a couple in the proverbial can than to do comics on literal napkins which is something we actually did for awhile. Thornwatch is not like that, and coming up on fifteen years of this shit that is pretty novel. I know All (or at any rate Most) Of The Things.

I used to walk around at Whitman with my stomach turning over and over, trying to imagine what the fuck kind of shape it was making in there, because I was doing these stupid .jpegs with my roomate back home and I couldn't shake the feeling that we were onto something. I feel like that again, again, when by any reckoning a person would be lucky to feel it even once in their entire lives. Now my heart feels like it's trying to get out. Maybe this nothing to do with the Lookouts, or the Daughters, or the Thornwatch; maybe I should call a doctor. I'll wait a little bit, and see.

I should emphasize that I did not attend Whitman, I was walking around with a girl I knew then. She lives at my house now and when we are not watching Doctor Who or waiting for Doctor Who to come back on, we make and tune human beings. It's kind of weird, but it's also kind of cool. You have to fill this time up somehow, I guess.

The trailer for Bioshock Infinite and the walkthrough for Fuse are both must watch. That's, like, your homework or whatever.

you don't have to hide