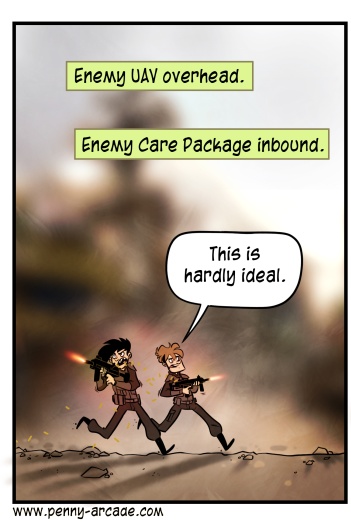 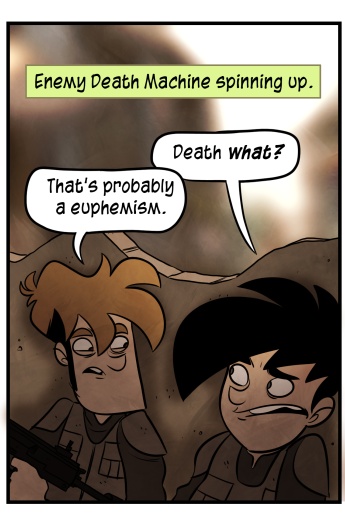 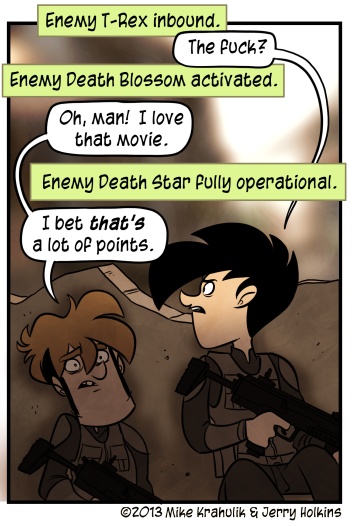 We've been playing the game known as "Codblopsii" on what is almost certainly the wrong platform, and enjoying it too much. It came out months ago, so if you were the sort of person who wanted to play it, you probably were already; coming into that ecosystem, lousy with brutes and demigods and others who have drunk from sacred chalices or whatever and now they're level Fuck You, is a spooky proposition. They want to blood-slake their darkthirst. And, as I have suggested on countless occasions, my blood isn't especially hard to get.

I am the Capri-Sun of blood-slaking.

The overall experience is strangely bulletproof; as long as you exist somewhere in the WiiU's wireless tether, you can play this game (and others). I do lament that it isn't simply a wireless device, functioning like the ancient SlingBox or whatever; the ability to play what we might call "real games" anywhere in the house would have been tremendous. I assume that it doesn't work that way because Nintendo doesn't have absolute control over the experience - they can't guarantee that it would be as good as the one we're raving about. Probably something to be said for that.

In terms of the "online service," we haven't had any problems we didn't also experience on Live. My only real question was about how the controller and the system in general would manage Voice Chat, but the answer was almost ridiculously simple. Gabe picked up something custom from Turtle Beach, an Ear Force something or other, which isn't especially uncommon, but I seriously just went and got the headset I use on my computer, plugged it in, and it worked perfectly. I tell the WiiU to mute everyone who is NOT Gabe, and it does so. I'm not sure it's even possible to fuck it up.

The shit our opponents are calling down from the heavens is straight up gruesome, with hilariously overwrought titles and insane audio accompaniment. I don't even know what it's called, but they can summon something that sounds like a rancor being forcibly digitized. It completely disconnects all the important parts of my brain; the fear is so vast and textured that it takes all of my consciousness just to feel it. We have endeavored to contain this paralytic scenario in today's comic strip.