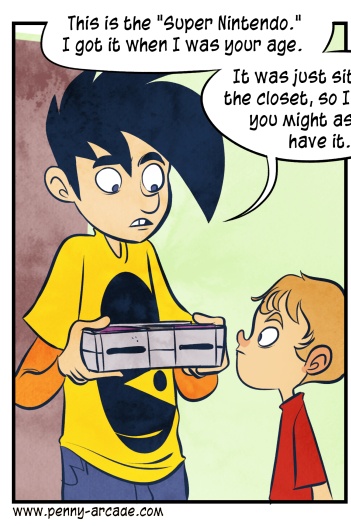 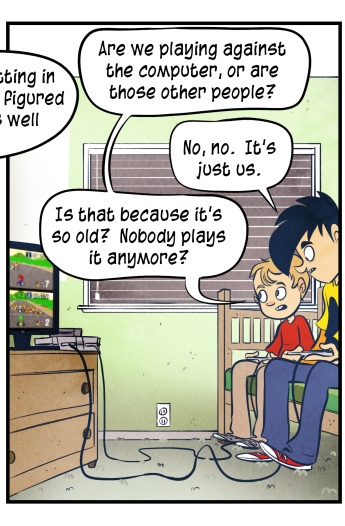 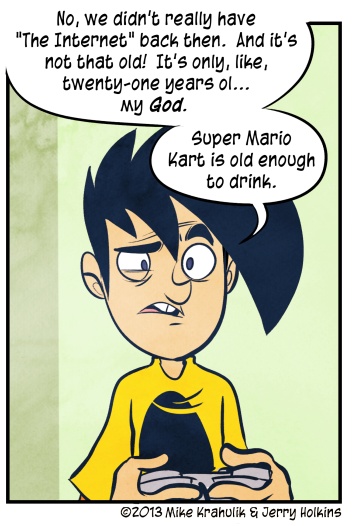 Every couple years, a few plastic tubs get tilled up from somewhere in the office.

They came out of some closet of Gabriel's years ago. This is something that is always happening here, boxes of old treasure are always bobbing to the surface, and you'd think that these events would be finite - that eventually he would run out of time capsules. I want to see these "closets" for myself. I will bring rope and a headlamp. I will also bring a "Lunchable," which I think is the singular form of Lunchables.

We hauled out a Nintendo Entertainment System whose gray carapace had so yellowed with age that I assumed, just assumed, that it was some special edition of the console. But that whole era was just another strata we were boring through to get to the SNES below, its sleek trunk cocooned in ancient, warped coax.

Incorporating the old girl into the metastasis of the modern entertainment center required the use of a UHF converter thingy, a device whose actual purpose never occurred to me as a young person. It was less a device and more an intercessor, it was the material component in some ill-understood ritual. Once it was in place, and the television switched to the holy Channel 3, he could see the output through a curtain of static. There was a break inside the cable somewhere, and the only way to make it display properly was to hang the cable trunk over the front of the television, so that the weight of the bundle provided constant therapeutic pressure.

There is a lot that young people don't understand, not simply as a function of their youth, but because they don't have to anymore; something like "television shows come on at certain times" seems like foundational knowledge, or how to work today's baroque twenty-seven input controllers. Except they have access to the Omnipresent Meta-show by default, and they just touch what they want to play. Gabriel the Younger spoke the best truth he could in the second panel, the best truth available to him.

These are people for whom "online" is a meaningless term. The Internet is some all-encompassing animus; they live in a time where The Force is a real.