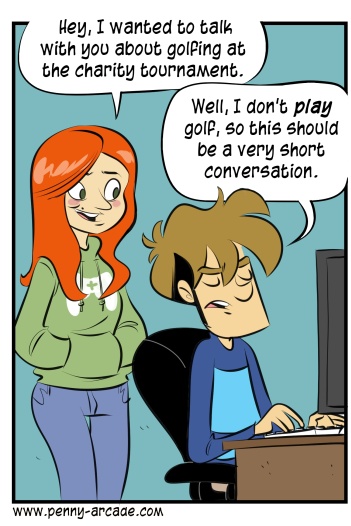 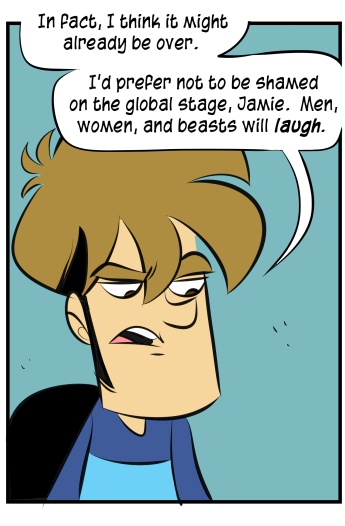 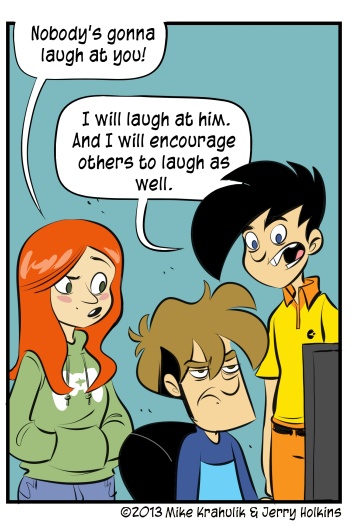 What I actually said was "Yes Jamie, Thank You Jamie," but that comic sucks. This comic improves substantially on reality.

I met one of the guys on my team at the first Golf Tourney we ever did, and we kept in touch - he's pretty sturdy, as I recall. And the "format" is Team Scramble, one of several co-op variants, which has everyone hitting from the best position each time and ultimately sharing in the best score. I would never say that this meant you should bet on my team, or whatever, or follow my curse-laden journal of horrors on #CPGolf, but it does elevate the possibilities from "that's genuinely insulting, shut up" to a score below two hundred strokes.

All primary writing tasks for On The Rain-Slick Precipice Of Darkness 4 - the culmination of the games I started writing in 2008 - are now complete. Enemies, items, attacks, dialogue, all of it. Good god. I have to type it here so it will be real and maybe the muscles in my neck will let go.

There wasn't going to be a third game, let alone a fourth one to finish it out, and I want to thank people for making sure we understood that you hadn't forgotten it. I would also like to thank Zeboyd Games (which is really just thanking Robert and Bill) both for having the courage to do what they're doing and also for being down to perform this kind of unholy resurrection. It has occasionally been terrifying, like any prolonged psychic exposure. I enjoyed it, in aggregate. I will miss it.

So, the game is coming out on June 7th. That's when. Five bucks, like before, except I'd be very surprised if you didn't get more time out of it if you wanted to. To celebrate, we're giving away Steam codes for Precipice 3 all day, or until the codes run out. This is the final version, which means it has a brutal bonus dungeon, character art packs, and a wholly self-contained adventure we released later called The Beginning Of The End.

There are a lot of codes in the database, like... a lot, but getting a code sooner rather than later is probably still advised.