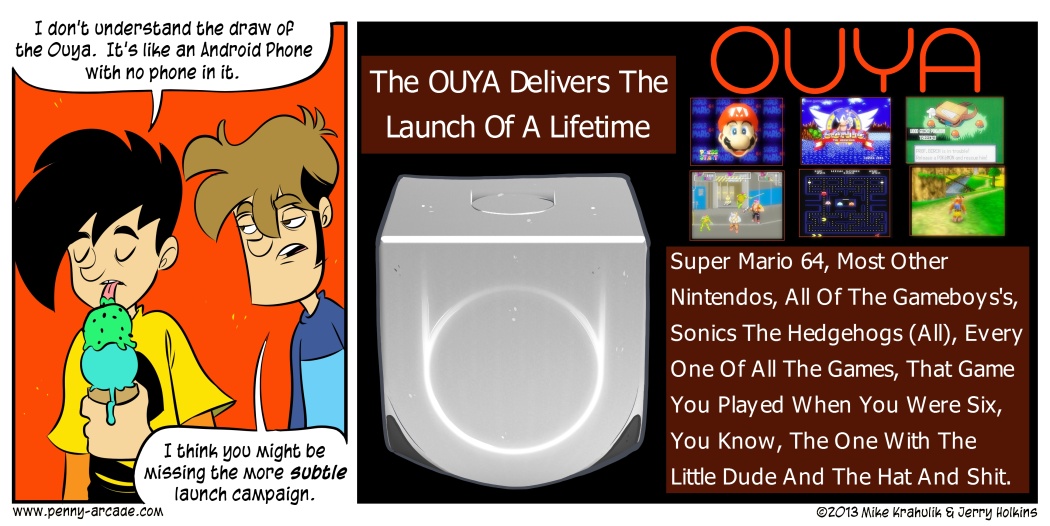 I hadn't really followed the Ouya very closely, other than to note the supernatural sum generated by its Kickstarter. I have a lot of machines that can play games, so if someone tells me they are making one also, I am usually fine saying "cool" and then waiting to see how things shake out.

Then, people I knew would tell me that they were working on an Ouya game, or games, or they were keeping the Ouya in mind for a mobile project, and I would generally try to be cool about it but my eyebrows are connected directly to my brain and sometimes my eyebrows would say "what the fuck are you talking about."

Ben over at PAR has been on this beat forever, though, and his piece on TowerFall (I've played it; it's fantastic) came around the time I was starting to investigate some of these other shit. I know Kim Swift has a crew working on something called a Soul Fjord; I also know that David Sirlin tagged in Ludeme Games to gin up a version of his Chess 2 for the box. Exclusivity is a gradient in 2013, so I'm not saying that they'll always be there and nowhere else - but God Damn. Curiosity don't cost me nothin', and they've absolutely earned that. Ben goes through the launch box here, if you want to get right down to it. It also does a startling impression of every previous console, I'm told.

I am on record as being okay with Sports per se but being bonkers for simulations of Sports, particularly ones that take place on a table. I backed the shit out of Dreadball, which looked like a boardgame but was actually a wargame informed by boardgame sensibilities. I'm a wargamer, so I didn't care; that said, it wouldn't surprise me if somebody was looking at a sack full of ratman parts and wondering what precisely they had purchased.

There's a Kickstarter with three days left on it for Kaosball, a sports boardgame inspired by wargames - and it's by Eric Lang, who is a personal hero. So If your personal hero says he's making exactly the kind of game you like, and he wants you to make characters for it, you say no. Well, you might say yes. I said no. But he didn't accept the answer, so after devouring the manual I started sending him prototype designs. Gabe's ability to absorb damage from other figures makes him an especially nasty ringer for the Goblins, and Tycho's ability to spread damage gives him a brutal synergy with the Amazons. I sort of wanted them to "hate" each other, mechanically, and I think we got them to a good place.

They come free with a pledge now, and I was overjoyed to be a part of it. Take a look at it today, partially because very soon you won't be able to, and also because (like the rest of his ouvre) it's shit hot.