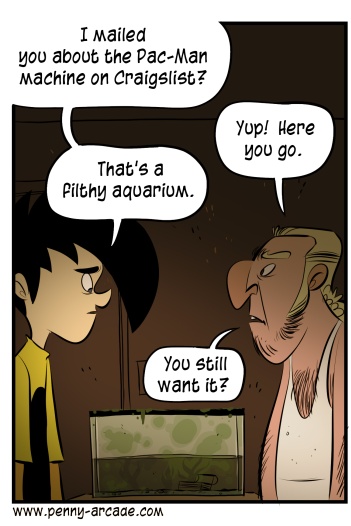 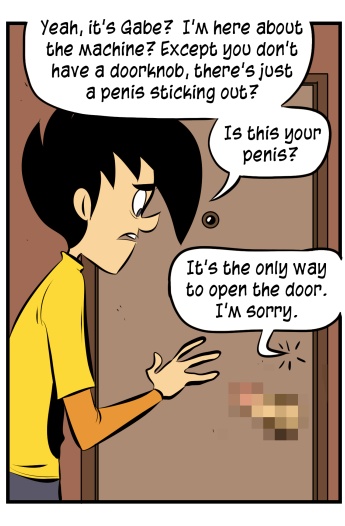 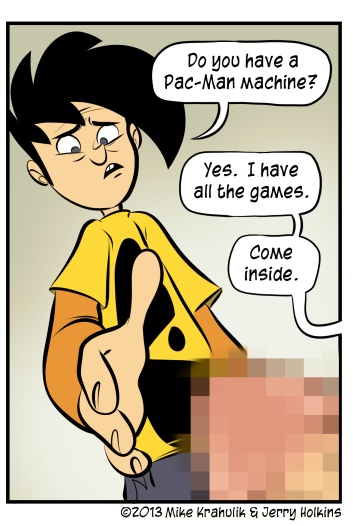 Craigslist is just the weirdest, weirdest site. I'm almost fifty-fifty between experiences where people "gratefully, even tearfully pay me for things I don't even want anymore" and those who "come back to my fucking house uninvited, wild of eye, as though under the brainsong of a psychotropic worm."

As I suggested before, vendors of arcade equipment ("cultural artifacts") run in two distinct bands: people selling and people getting rid of, and you'll see both on the prowl at Craigslist. The asking price is usually enough to calibrate the instrument. In Gabriel's case, he was only doing spot checks for specific machines he couldn't find elsewhere, and he found a guy who was used to being screwed the other way around, which I'd never even heard of. People will apparently arrange a time for him to deliver something - in this case, a super ungainly four player cabinet - and then when he finally hauls this thing out someplace, it isn't an actual place and there's nobody there. Then he has to drive all the way home again and unload it. Oh man, these humans! I can't get enough, they're great.

Ultimately, Gabriel found another dude who was willing to let a handful of his top picks go for a single, strangely low price. I wholly expect him to be in receipt of a trailer full of birdcages or topiary frames or some shit.

I've had a few days to think about what I would get for "him," not enough time to start pricing or anything, just to have it in my back pocket when the time comes. I would say the primary difference between the two of us arcade wise is that I really, really like SHMUPS and I think he mostly tolerates them. Because there must always be an exception, Ikaruga is there to fit the bill - I think he really wants something else to do in a game like that, and its genius polarity stuff fills in the cracks. He also does not understand pinball. I mean, he understands that there is a silver ball and that you can't let it go down through the hole; he doesn't understand why I find them beautiful. I tried to find a word to describe how I feel about them that wasn't the word beautiful, but I couldn't do that and be honest. They're playable sculptures; I don't know what you want from me.