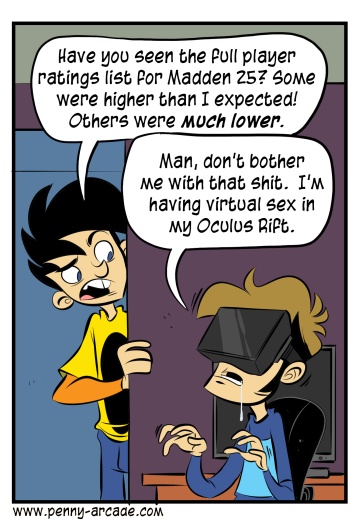 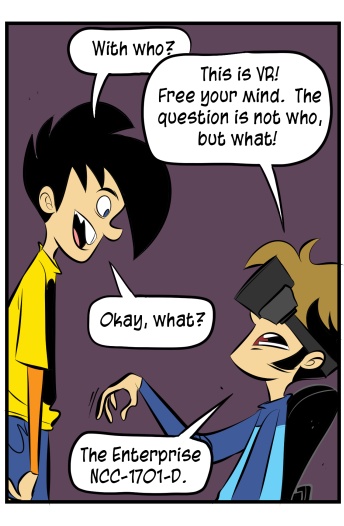 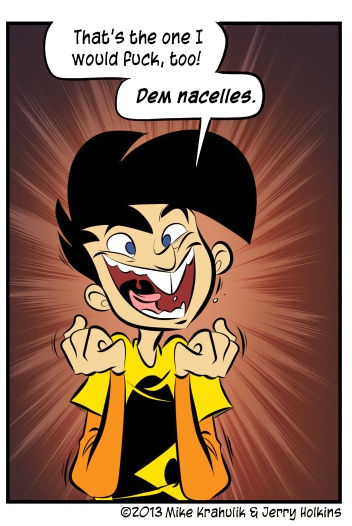 I read Ben's thing about EVE: Valkyrie, and I saw something over at Joystiq about some spitballed VR shit for the Oculus Rift, and it occurred to me that somehow we've never made a comic about the thing. This is after having the Goddamned future strapped to our heads. I was even eaten by a shark at one point! No strip catalogues the event.

Being eaten by a shark sucks, if you were wondering. Even if there's no shark, and you aren't really being eaten, and you were warned about hungry sharks. Even if you sought the shark out specifically to be eaten by it. It's a weird device. Google Glass is hacking society; we've talked about that. It warps shared space. This Rift thing gets under your own biological hood. Its weaponry faces the other direction.

You can fall in love with someone who brought you some hashbrowns. You can fall in love with a colon and a parenthesis. You can, and will, and maybe should, fall in love with an ellipsis. I fell in love roughly every twenty seconds as a young person on QuantumLink. We don't require much to set the brain's various fiefdoms alight. We just have to believe what is coming in, on some level. That's all. The challenge is to remove as much falseness and artifice as possible, to dissolve or dilute mitigating factors. The Oculus Rift can get you pretty far, in that respect. I expect to be fully terrified by the proposition.

I wasn't really aware how much I wanted "eSports" coverage until Andrew Groen started on over at PAR. He's got a handle on it in a way that catalyzes my own interest, which is as good a compliment as I know how to give.