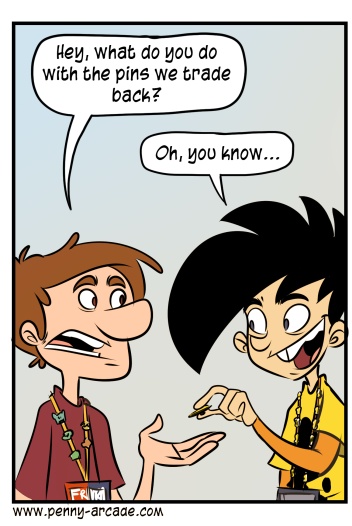 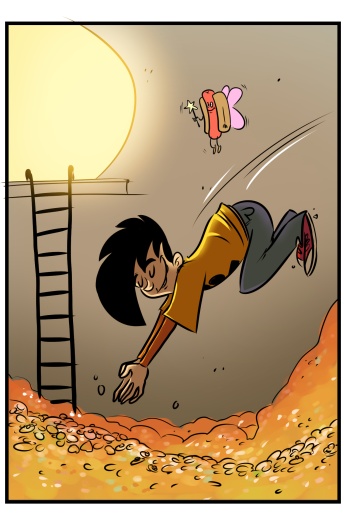 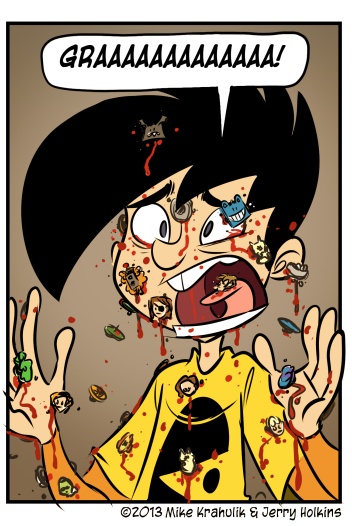 Ordinarily at this time I'd be trying to disassemble an Incan stonework of tightly compressed memories in a more or less mute attempt to communicate the previous three days. But since PAX Prime is now four days, I'm still trying to do that while new memories are being added higher in the stack.

The purpose of the four day gambit was to allow people who wanted very badly to attend PAX access to the show, and in my experience - I've met hundreds and hundreds of people - it had the intended effect. There are also many people who come for a single day, now; Helljumpers, fired from orbit, ready to PAX as though PAX were a verb. I like it.

We did the Make a Strip Panel on Saturday as per usual, and this was the result; it's a question that we get often and we DO have a lot of traded pins. The real answer probably has more to do with being sanitized and offered in blind boxes, but that comic SUCKS. I think it's worth noting that between Gabe's Surface (the computer, not, like… his skin) and Manga Studio, he's able to deliver a much more robust product under hard constraints. Without those tools, I don't know that he would have even attempted something this elaborate on stage - let alone completed it in eighty minutes or so. Yeesh.

Good God, I've been busy. I saw Randy Pitchford from Gearbox playing Samurai Gunn with his son, who was bouncing and leaping around his father like an electron. I saw young leapers quite frequently over at the Aztez booth, which I made a point to visit at the insistence of Rami Ismail who you know from Ridiculous Fishing and a ton of other stuff. The reason he told me to visit the booth was because of designer Ben Ruiz, who I'd never heard of before and will now listen carefully to every word that comes out of his mouth. He "thinks" about brawlers, which is interesting in and of itself, but his understanding of beat-'em-up as a formalized discipline is fascinating and he's baked it into Aztez.

As is probably becoming quite clear I tend to spend a lot of time in the Indie Megabooth. There are logistical reasons: it is a quick jaunt from there, past the Elder Scrolls Online booth for a peek, down the escalator into the Annex where the LAN, Magic, and D&D are at, down the elevator to the street, and around the corner to the Paramount which is where I usually need to go. But I also never really know who or what I'm going to see there. It is a calorie dense food; it's a great way to catch up on the sort of experiences that tend to get written about, because you can't help but write about them, like That Dragon, Cancer.

I don't know what else I will remember about this show, which things are going to stick, but this one has already set up shop. Brenna and I do not talk about videogames, except to argue about how much of them our children should play, but we talked about this one for an hour. I find the conversation about what is and isn't a game as boring as the one about whether games can make us feel things. I can tell you what he made, and you're welcome to argue about it if you want to: he has encoded the experience, his actual experience, of being a father to a son doctors tell you will not and cannot live. It is an act of incredible bravery to collect it at this level of emotional "resolution," and we talked for as long as I could possibly spare about what it is to be a believer in God in the world we have been given.

There are a pile of tissues by the controller when I sit down, and in my mind I think, this is presumption. As I am reaching for one after playing it, I'm reminded of novelty games like Samba De Amigo or Donkey Konga - games with custom built hardware synonymous with the mode and style of play. This is what they have done: they have made a game where tissues are a necessary peripheral.

I come by later, after the hall closes, and he and his crew are looking at another game on their Ouya - there is a huge robot and a spaceship, and it is the polar fucking opposite of what they're doing. I ask Ryan if this is from a later level, after you discover an ancient starship and "take the fight to cancer." He laughs; he looks like he needed to.