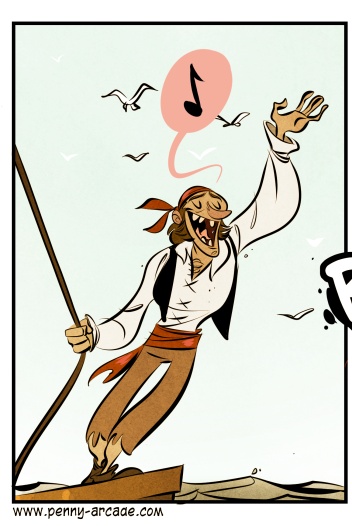 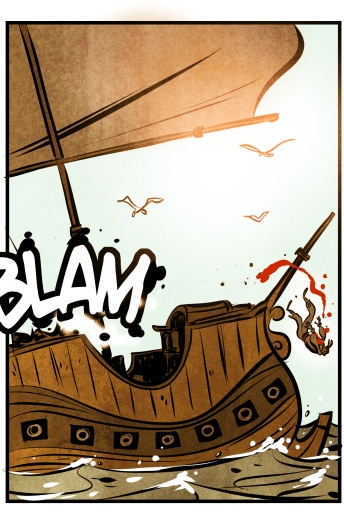 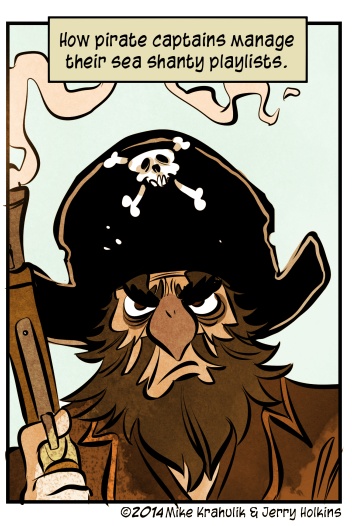 Like the music pages in Assassin's Creed 3, mystical tunes flip around in 4 and they must be seized. The extent to which they must be seized of their own accord varies from brain to brain. Most "collectables" exert no force upon me; I can take or leave them. I might feel a twinge upon completion to see some minimal percentage, but I'm not getting any younger. Nobody is; that's not how it works.

If getting one of these music things (or hounding Gabriel until he gets it, same diff) materially improves my experience, though, I'm in. Far Cry 3 encouraged hunting just enough for me to do it. Here, these things expand the repertoire of sea shanties the men on the deck will sing. They're fucking rad, and every new one you get makes travel that much better. Playlist management is a concern, but these are problems with solutions.

- As far as Banner Saga is concerned, somebody died, so I started over. Still trying to get this dialed in. This is a ponderous game, straight up. I think they meant it to be this way, and I think I probably like that, but even with art like this I think Gabriel has found it a tough row to hoe. Since Banner Saga got kicked initially, we saw the release of a revitalized XCOM into the same space; that got hold of him good. But I want lots of options for tactics on PC, I need it healthy, and I'm glad that we can have both.

- No matter how fast you play Telltale's adventure games, provided you're playing them in "real time" as they come out, there is a floor on how long they take to play. This waiting, what the writers of serials have always understood, is a crucial part of the narrative experience. This is a substantial innovation in the realm of adventure games, and it's something I like. I say that because Broken Age: Act One is perfect and then it is gone, very quickly. These are the true facts. I wish there were something, even something wholly manufactured, to let me savor it. Like other men, I strain mightily to minimize the importance of length - focusing instead on other virtues. Like "playercount," "duration" is only a little symbol in the mechanism I use to determine value. The interactions between every twist of that device result in a fully three dimensional assessment of an experience which cannot and Must Not be distilled. That said, it is so fucking short you guys. There is a place a few blocks from where I live called Cafe Besalu which has this little thing called a Ginger Biscuit. Every bite is perfect, but it's small. But it's perfect. Some things are this way.

- If someone is complaining about the number of players in Titanfall, they haven't played it, and that's really all that need be said. It's not anymore complicated than that.