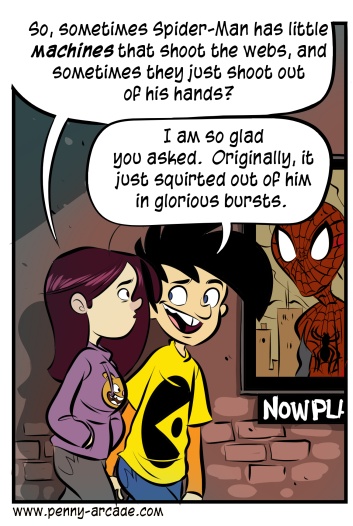 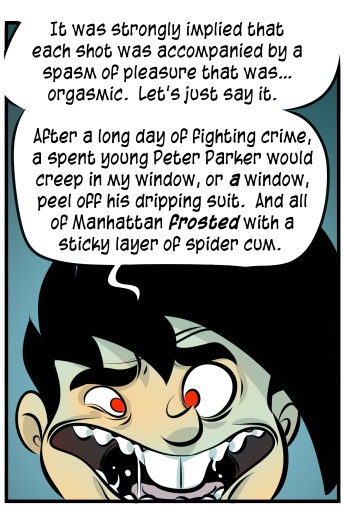 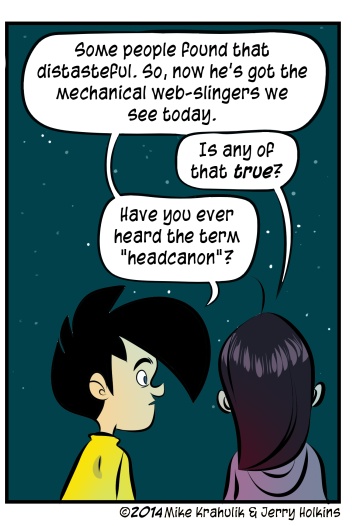 I think something along the lines of this strip started when we were streaming Amazing Spider-Man 2, it happens fairly early in the broadcast, but it apparently made some kind of dent in Gabriel's skull that proceeded to shape thought.

There is a specific term in the strip that I think is incredibly gross, and I couldn't remember who made it up, but my co-conspirator says that it was me. I asked him if it was okay if I told people that he had done it instead, and he said no. But many wholly factual matters are studded with twinkling infinities, and nestled within those infinities are realms we cannot imagine, shaded with hues for which there are no words. There is no map. Ultimately, we must find our own truth.

You don't really know when the next episode of a Telltale game is coming out; you get a heads up shortly before the cusp, but that's it. There's something, but not much. Kentucky Route Zero, on the other hand, arrives in a manner consonant with its thesis: out of nowhere, to entirely fill the space.

I wouldn't use the term "magical realism" to describe it if they hadn't first; I'm familiar with it mostly as a type of theatre, which I spell with the "re" because Brenna has a degree in it and I think it would bother her otherwise. I don't use the word "actress" for a similar reason; I had no idea the term was deprecated. Before it was my task to constantly transfer my sanity and wealth to my larvae, we used to watch a ton of local shows. I have a special relationship with the forms of magical realism.

I'd never seen the Kickstarter campaign that birthed the whole thing, not until I had three of the five episodes under my belt, and seeing how the concept has shifted since its conception is fascinating. References to specific types of traditional environmental puzzles that don't really have a place in the work as it stands. A radically altered mode of presentation - a far cry from where they arrived, to one that gestures and doesn't define.

The game is theatre - and fuck you, spell checker - not simply by virtue of the Act structure, though it certainly provides a clue. You are not an actor, though, or any specific character. The emotional reality of what they're doing here is so far ahead of the curve there's no response to it, no mental machinery to protect you from it, and if you have ever wondered how it might feel like to be the stage upon which human mysteries are peeled and eaten, you can.