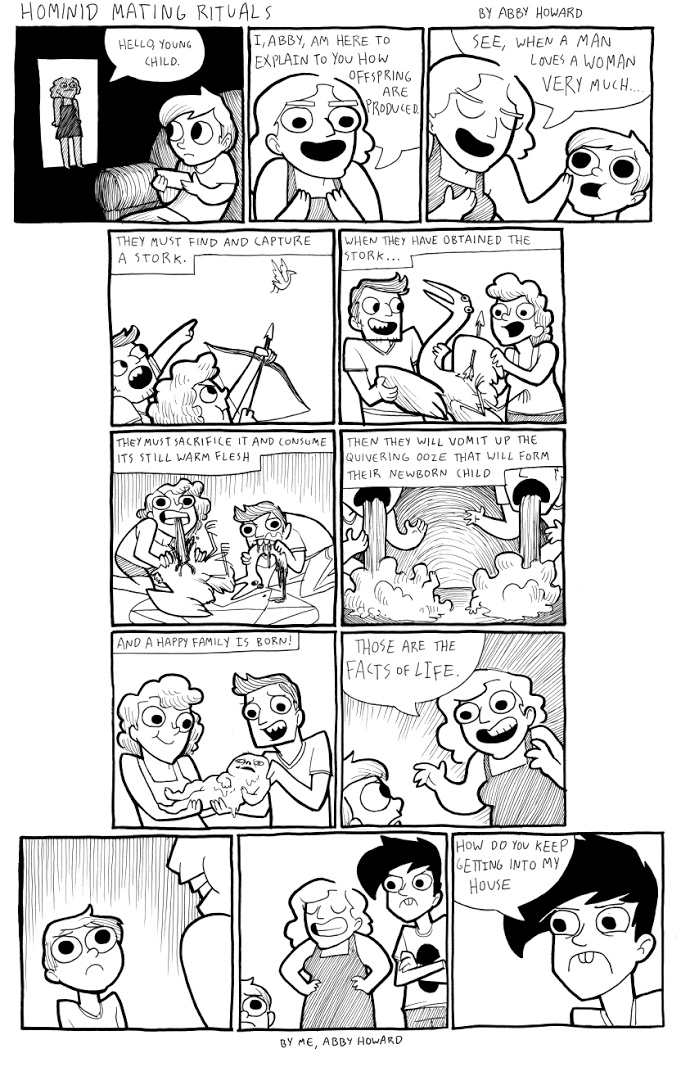 Strip Search is still paying dividends, years after filming. Or, year. I have to be honest with you: I don't know how long ago it was. The actual filming and subsequent release of the show is is filed away as a four dimensional holomatrix. If I want to try and synchronize any part of it with actual time I have to probe the memory, pushing it this way or that, like a tongue on a loose molar.

Meeting Abby Howard, who was obviously a superstar, ranks sorta high. Maybe like on the show or whatever but also just in general. You could read Junior Scientist Power Hour and be convinced of her birthright. You could also read The Last Halloween, the work funded by her offensively successful Kickstarter, if you were still iffy on the superstar thing. Or, you can read her contribution to The Talk (also known as today's strip) right here.

When last we spoke, she and I, we spoke of butts.

Hey! As Gabriel suggested we are attending San Diego Comic Con this year and will be at your devoted service, waiting patiently at Booth 1334. We are bringing a highly curated selection with us, epitomized by this precision imagery:

We're trying to make the show easy on every axis. As intimated, one thing decidedly not emblazoned upon our holy banner is the fact that we'll have pins to trade as well. So if you've got any of your stuff from a PAX show and you want to swap, we're down. I don't know how long they'll last, but I was going over some of my mementos from the Australia trip and I found a handful of AUS pins. It might surprise you to learn that I can't just pull those out of a box here, or something: they don't exist. We don't have them. Every Australian pin that exists is in circulation.

Come and get 'em while I've still got 'em to get.