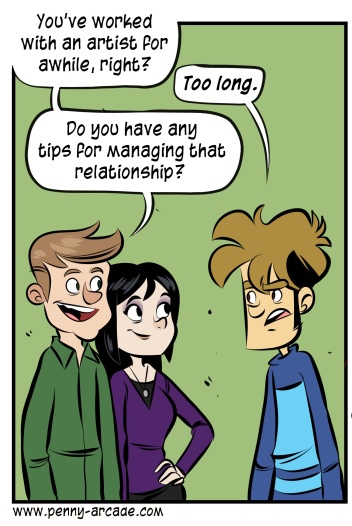 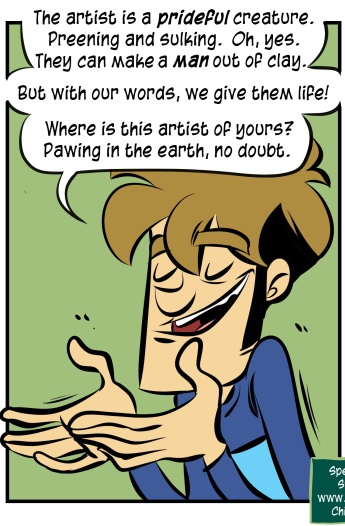 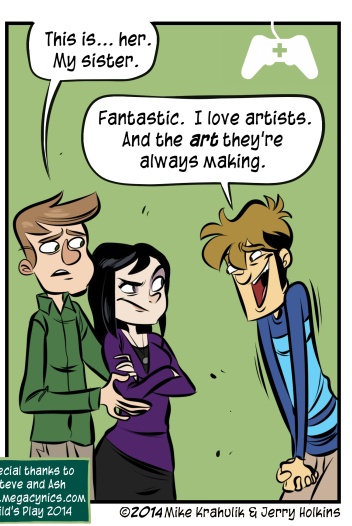 As is our way, we have delivered the most recently donated Child's Play Strip at or near the buzzer. I think the buzzer might already have gone off actually, but we ended up doing it for people who are as busy as we are, if not busier. It ended up being a crossover with a comic they also do in addition to everything else. Here's theirs, and here's ours. Many thanks to Steve and Ash for letting us play around with their toys.

I love Dragon Age; one of my favorite "work for hire" projects was making an item for the sequel. Which ended up being a weird game. But it did gave the series a visual identity, brought the setting to a boil, and - crucially - allowed the player to fuck the shit out of wizards. I think it's going in the right direction; I preordered that shit forever ago. Sales seem to tell us that RPGs move best when they smear themselves in the guts of open world adventure games, so hopefully they can find their footing there. I need them to keep making these so that one day I'll burst into the room when my son is trying to do a sex thing on an elf or, like, a sentient hunk of mystic Cathedral, and get so red his face will match his hair.

But Dragon Age is not a game I find serious. A game need not be serious for me to enjoy it, now. This isn't some bifurcation I use to save myself time. Dragon Age feels broad and pulpy and fun, it's a morality play. I think everything is on the table as far as that world is concerned, I think they'll do anything they can to expose the bright, firmly delineated moral switches you need to flip. I would differentiate that from The Witcher very strongly. The Witcher is, for lack of a better term, an amorality play.

People use terms like "realistic" to describe it and other "hard" fantasy, but for me it's more about the idea that there is a ground floor anywhere in the system. There's a strata below which exists nothing, a spine, that if you sluiced away all the names and narrative would still exist. The Witcher doesn't feel like it's made from whole cloth because it has, as it's "ground floor," folk magic and folk monsters. It posits (as I probably said last time I had an opportunity to regale you with this shit) that medieval wisdom about the natural world is science and not superstition. Geralt succeeds because - like Marinus Bicknell Willett, or Ulysses Everett McGill - he has uncommon knowledge of the system. And we feel that when we are with him, also. We can feel the earth beneath us, and it lets us believe in it.

They just dropped the opening cinematic for it - it's on Youtube, by the way, you don't have to watch an ad to earn the "privilege" of absorbing marketing materials - and it gets right to what I'm talking about here. I know who these people are. I don't think you need to. But you should.