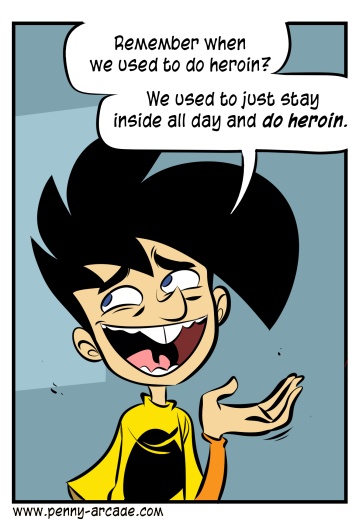 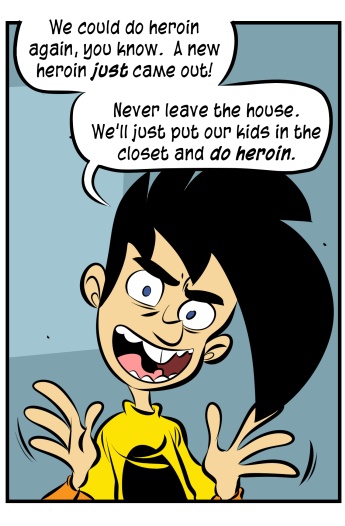 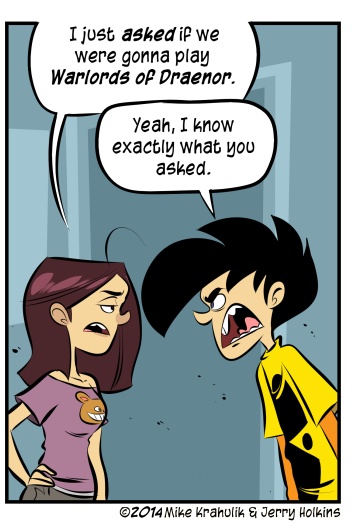 World of Warcraft creates "social media campaigns" without even mounting social media campaigns because you talk about it a lot when you're playing it. This just naturally happens. And it floats in the shared air of the internet like a spore waiting to hatch in your sinuses and grow a knobbly spar into your brain.

Even in the full knowledge that it was a creature of sophistication and bearing, I was mostly content to let others return to the ancestral shores while I made due with the contact high. I was able to deflect the torrent of hot caramel fudge shooting from Scott Kurtz in virtually every direction about this homecoming. I thought that we were safe; indeed, I am still safe. But Scott's wife Angela started talking to Kara about how much fun they were having in there, and that's that. There's no armor on that side. It's like when "the call" comes from "inside the house." You got nothin'.

So now he's doing that.

My clan is headed over the mountains to Spokane, where there is no Dragon Age. The "eMachine" they have there would catch on fire at the mention of it, and the less said of the ancient Windows NT print server, the better. So I feel compelled to eulogize the game. I feel compelled to make a lozenge of my wanting.

There is a "big picture" for Dragon Age and I see it now. You can play the new one for thirty hours, as I did, and not really be playing it at all. There's a lot of dirty work in this setting up front, in the first two games: a lot of tent-pole placing, a lot of trench digging, but when you see how they play around with those things now - how they invert them, or unfold them, it's marvelous. I want to interrogate them: when did you know which things? Did you make this franchise backwards, and have to spend a decade getting where you meant to go?

I think I've been too hard on their substrata, now. Dragon Age had to mature, essentially, in full public view. And then you get to this third one, except it feels like the First of its line. The other games aren't even dress rehearsals for this. It cribs from everywhere, literally everywhere: iOS shrapnel of the "bar filler" genre, elven street drugs, MMO titrates immoral in their potency, and they've sewn it around a marvelous homage to their genre defining earlier work. It could be the last thing you made, or the only thing, even, and noone could say you hadn't created a kind of coordinate, in space and time, that the work of others will be judged by.