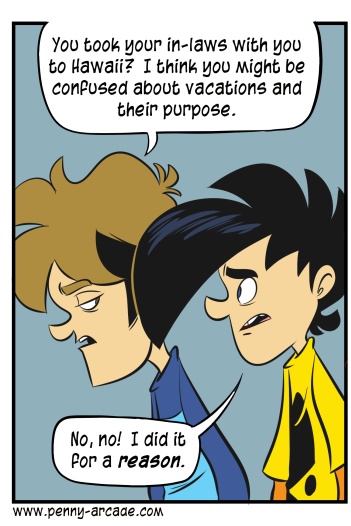 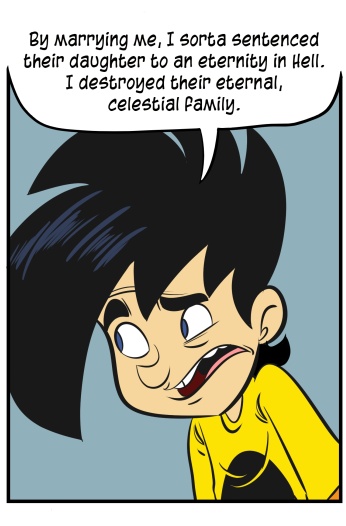 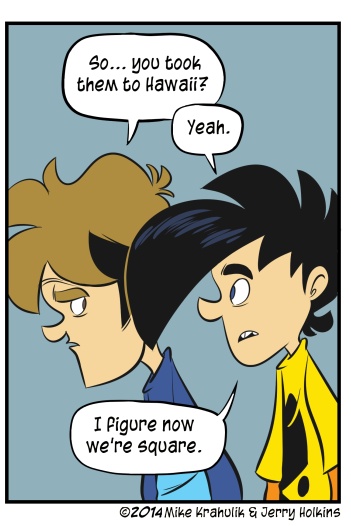 The principle enunciated in the strip is true, I suspect, for many lives. The solution may be unique. And I don't know how effective such techniques are long-term; one imagines this might get very expensive. And even then, there's no guarantee of success. A man may leer over a Virgin Mai Tai just as easily as he may leer over a hot cocoa.

I know if I like a visual design, but I also know that it's possible to have low or tawdry taste in these things and so I never know if I can feel truly superior to others. It is at these times that I turn to Mork or Kiko for help. I will say, "Here is something I value aesthetically," and await their response. Have I exposed some latent Philistinism? And have I been rendered "basic" thereby?

BUT!!!! Gabriel agrees that the Unicorn from Chaos Reborn, the one with the awesome sword-head, is pretty Goddamn fly.

I bought the game on Early Access; I missed the Kickstarter because I decided I wasn't gonna start any Kicks, or that I would start fewer Kicks, because I had overkicked at one point and then I was buried beneath pounds of molded plastic. I would have Kicked the shit out of this. Anyway, I am not telling you to buy the game on Early Access. You will go into menus because you want to see what is in there, and it will say that part isn't done, which is the opposite of what you want. You can play against the AI now, which you couldn't do when I first picked it up. In the same way that you can like like someone, this is Early Access Early Access. What I am telling you to do is to keep a very close eye on it.

My anglophilia as regards British software didn't really kick in until I had an Amiga, so the game Chaos Reborn is reborn-ening - namely, Chaos: The Battle of Wizards - isn't something I'd ever heard of. It sounds like it might have filled the same role that Archon did for me, or close, but there's so much about it that's still crazy smart. You might like this article on Eurogamer if you are a fan, or would like to understand such creatures.

In either Chaos, you're a wizard (Harry), and in a scheme copied billions of times in the thirty years since its release you get a hand of "spells" you can use to summon creatures or equipment. I mean, stop me if you've heard this one. This form has been iterated so many times that it might seem like it represents some universal constant, but a person invented it at one point. You're summoning them not to an abstract play space but to a battlefield, rendered in the new one by hexes, which places it squarely in the Megachess supergenre (a board, and a "king"). I think the art for the new one is inspired, also, but I might have to check that with my cohort on a unit by unit basis. Everything seems obsessively considered.

Being dealt random spells instead of building decks will agitate a certain type of player, but in a game that isn't based on the company constantly releasing new foil packs, "playing the hand you're dealt" ironically offers a stable platform. There are no hit points, so units - including you - live or die based on very simple rolls. It is very surprising when your eldritch sorceror-king is nibbled by a rat and then dies, but it sets the whole enterprise on a precipice. For a certain type of player - and I suspect that I may be rendered somewhere in that continuum - its the sort of vibe that makes them want to put their post up so they can try another round. You know. Speaking euphemistically.