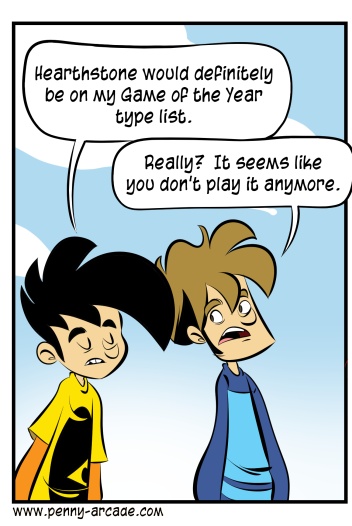 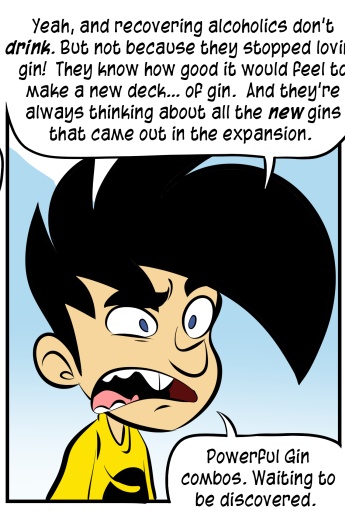 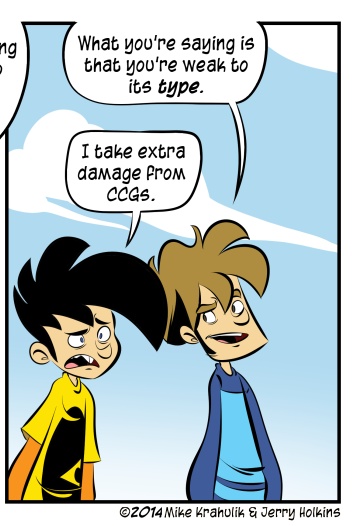 I'm trying to figure out which rituals are meaningful to me. I did not catalog the year on the site proper, though we did contribute to the aggregated lists of others. I've read a lot of lists that purport to describe the year, but are instead communiques from an alternate universe where Kentucky Route Zero did not win this year and also win permanently in every category. Or maybe I am the one in the alternate universe. Here, let me subtly adjust the atomic weight of hydrogen. Are you picking up on that? How's your hydrogen doing.

Gabriel would say that Hearthstone was up there, so much so that… well, it's weird. There's a point on the continuum where something is too good, and you avoid it? Think about how fast games are being adapted to our psychology, I suppose; it had to get there. I talked with a dude New Year's Eve who described the curve of this endeavor, where games eventually satisfy so many of our desires that they are always the optimal decision. He smiled the whole time he did this, but then, he's a game designer. Presumably in this dystopia they sit atop thrones made of meshed gamer bones.

Beginning in September there's so much information to integrate that I straight black out; perforate this period with PAXes and my mind becomes as porous and rigid as the Premier Garden Sieve from Bulldog Tools - the only garden sieve I am contractually obligated to endorse. So, I missed something I shouldn't have.

You Don't Know Jack is the only videogame Brenna will suggest as an activity. It's something we used to play off a CD at her parent's house in what feels like another life. We've stopped back by the franchise every now and then, as they've spun the tumbler over there and somehow charted a course through the most fraught cultural and technological waters. But they released a "set" of games called the Jackbox Party Pack that includes a bunch of rad shit. I told Greeb to buy it, and he did not, but I'm gonna get him into a round of Fibbage or Drawful later and he is gonna be overcome with contrition or whatever.

I think Word Spud - essentially a word association "game" - would require a very specific group to be a success, a group whose contours I can't actually envisage at the moment. I don't know why it has scores. I could talk for awhile about it. The main problem with Word Spud (And Lie Swatter, another game in the pack) is that they aren't You Don't Know Jack, Fibbage XL, or Drawful. It's like the chili flake packet that comes when you order a Pizza. Well, unless you actually use the chili flakes. Then the metaphor doesn't work at all. And I want to emphasize that I in no way feel manipulated by their inclusion. The whole pack is 25 fucking dollars, and I woulda paid that for any of the games I just mentioned individually. "YDKJ" is a game with legendary pedigree, the format is that of a TV Quiz Show with every trope of the form executed flawlessly, up to and including being broken down into discrete episodes. Don't rush into the game proper! The set-up screen by itself has some of the best "game writing" of the year.

As a piece of trivia, Gabriel is actually kind of bad at Pictionary and I am mostly terrible at Scrabble. A game I am good at, though, is the one where people make up definitions for a strange word and try to trick others with their fake definitions, gaining points thereby. Fibbage is like a trivia version of that game, where it might say that some place has a golf course in a _______, and every player submits a fake answer. Then, you try to choose the right answer in a minefield of your friends' bullshit. It's pure fucking magic. The longer it goes, the more self referential it becomes; it generates running gags that show up in the answers and then even in the names you choose for the next round. Drawful is a further embroidery of that concept, cross-bred with the vigor of Pictionary DNA. Now, instead of a trivia question, every player gets a private word or phrase that they have to draw. I'll explain how in a second. Then, what you have drawn gets titled by all of your friends, and everyone has to pick the real one from the tangled and generally hilarious mess. Oh! You also draw your own icon. I've gotten twenty five dollars worth of entertainment from this game before it even starts.

Something that unites these games is that you play them from your fucking phone. This is a huge part of their appeal, weirdly. Everyone has a private screen they can enter data on, and it's their phone. People love their phones. They aren't the gruesome, jewel studded yokes we leverage to control games, devices which normals often respond to as they would a sacrificial kris or hefty Desert Eagle. Everybody signs into the website and puts in the code on the screen, literally the most rudimentary pairing, and they're a contestant. There's a little latency that mostly shows up in the more time sensitive You Don't Know Jack, but God Damn. The phone aspect by itself flattens the demographic availability. Anybody can play. And they will. You might have to kill one of them to make the others leave.